Tokens are a currency in Brawl Stars that can be earned by participating in any game mode. They are also awarded whenever a new event opens. Tokens are used to open Brawl Boxes. Token Doublers can be bought in the Shop with Gems to double the amount of Tokens earned from playing matches.

There is a limit of how many Tokens can be obtained at a time. Every 2 hours and 24 minutes (24 hours divided by 10) 20 Tokens will be added to your Token Counter, with a total cap of 200 Tokens.

When the Token Counter is empty, you will play only for Trophies. You will still get Tokens for ranking up your Brawler or gains an experience level.

You can buy Token Doublers from the shop to increase the amount of Tokens earned while playing but not when tapping on an Event Slot. Each booster costs 50 Gems and doubles the next 1,000 Tokens received at the end of any match. Token Doublers can also be found in Brawl Boxes or offered in the Shop for free occasionally. Token Doublers can be obtained for free as Trophy Road rewards as well.

Buying Token Doublers is the most reliable way to spend your Gems for faster progression except for certain special offers. Some might argue that Tickets are better, but you need to consistently perform well on each Event match that you play to surpass the value of Token Doublers. In contrast, Token Doublers are guaranteed to give you 10 extra Brawl Boxes no matter how skilled you are.

Tokens can only be used to buy Brawl Boxes, which cost 100 Tokens each. This means they are used to obtain Coins, new Brawlers, Tickets, Gems, Token Doublers and Power Points.

To be able to get a Star Token from a Solo Showdown, Lone Star or Takedown event, you must place in the top 4 or in the top 2 in Duo Showdown. Star Tokens cannot be obtained in Power Play. 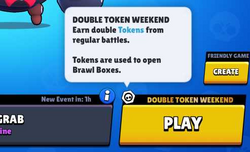 Once a month, there is a Double Token Weekend event. During the event, Tokens are doubled without the use of Token Doublers. The event does not apply to ticketed events such as Robo Rumble.

Retrieved from "https://brawlstars.fandom.com/wiki/Tokens?oldid=33840"
Community content is available under CC-BY-SA unless otherwise noted.