"Can you beat the Mega Monster and save the City?"

In the Super City Rampage Event, three players battle as a team against a dinosaur robot, trying to defeat it before it destroys all of the buildings on the map. If all players are knocked out or the dinosaur robot destroys all of the city before you can stop it, the players will lose. With each win, the difficulty will increase in the next level. Super City Rampage is an unranked mode, so Trophies cannot be earned or lost. If you are playing with teammates, the level is set to the lowest that the members of your team have reached. Brawlers' attacks and Supers are 3 times less effective at charging Supers in this mode. 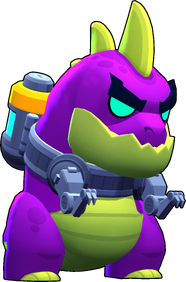 Every time you beat the monster, it gains more health and abilities. The last level that you can complete is Insane XVI.

Colt and Rico: Unlike Colt, Rico's Super does not destroy buildings and works well with some of the map's confined nature. His Star Power Robo Retreat allows him to continue damaging the boss without the risk of suddenly being knocked out by one of the monster's chomps. Rico's Multiball Launcher Gadget does decent burst damage in enclosed spaces, but as more and more buildings get destroyed it becomes less effective. Colt's Slick Boots Star Power, however, is in use for the entire match, and he has more damage than Rico. Both of these Brawlers have a fast Super charge rate even considering the nerfs Brawlers have in this mode. Their Supers can double their damage output, and landing all of their shots charges almost half of another one.
Max: Max can unload several shots with her Run n’ Gun Star Power and she can also provide a decent amount of damage. Her Super allows herself and friendly Brawlers to escape the monster’s agile attacks, but its short duration makes it more useful as bait than a decent defense mechanism.
Pam: Pam is a high DPS Brawler that can constantly deal damage. With her Mama’s Hug Star Power, she can continue to heal friendly Brawlers when low on health. This is useful in the monster's angry phase where its more important to stay alive and continue damaging the boss than running away.
8-BIT: 8-BIT has very few weaknesses in this mode, he is not a target to rockets or other enemies unlike in Boss Fight. The monster has no attacks that counter 8-BIT aside from its basic anger phases, making 8-BIT's damage booster to retain their teammate's damage output a viable option. His general bulkiness and long-ranged support makes him great in almost every team composition.
Gale: With his Gadget Spring Ejector and Super, Gale can make escapes and distance between the boss and the buildings. Super City Rampage is one of the rare occasions that Gale's second Star Power Second Wind is more beneficial. He is also capable of hitting all 6 of his projectiles due to the monster's large hit box; with this, Gale can deal 2688 damage at max level and provide a constant flow of damage. However, the monster's hulking size makes Gale's Super ineffective at moving them more than a few tiles.
Mr. P: Mr. P is average at best, but a combination of their Super and Revolving Door Star Power makes his porters a force to be reckoned with. An individual maxed out porter can withstand three of the monster's chomps at the lower difficulties allowing time for you and your teammates to escape. Even throwing the base directly at the monster guarantees an extra few seconds during its angry phase. If your teammates can't bait the monster during it's angry phase, the home base can be a secondary option.

Retrieved from "https://brawlstars.fandom.com/wiki/Super_City_Rampage?oldid=75139"
Community content is available under CC-BY-SA unless otherwise noted.