Sprout is a Mythic Brawler with moderately low health and a moderate damage output, but immense utility with its Super. It attacks by lobbing a seed bomb over obstacles that bounces on the ground and off walls. The bomb explodes on contact with enemies or after a brief period of time, dealing area damage. For its Super, Sprout throws a Super Seed, creating a temporary wall-like barrier when it lands. Its first Gadget, Garden Mulcher, makes Sprout consume a nearby bush tile and moderately heal from its consumption. Sprout's second Gadget, Transplant, destroys all active hedges from its Super to get its Super fully charged again. Its first Star Power, Overgrowth, periodically increases the blast radius of its attack. Its second Star Power, Photosynthesis, grants it a damage-reducing shield while inside a bush and for a brief time after leaving one.

"Sprout propels a ball of seeds that bounces around before bursting with a bang! If it makes contact with enemies, it explodes on impact."

Sprout lobs a ball of seeds over obstacles and enemies in its path that explodes upon contact with an enemy. If it doesn’t immediately hit an enemy, it will bounce for 3.33 tiles before exploding in a 4-tile wide area. The bomb will also bounce off walls, which allows it to travel further.

Sprout throws its Super Seed above obstacles that creates a hedge barrier. The barrier has a 3-by-3, 5-tile cross pattern from the center of the seed and blocks enemies' and allies' paths. However, if there are walls at most one tile away adjacent to where the seed was planted, the hedge will grow towards them and connect with the walls. As with any other wall, the hedge can be destroyed by wall-breaking abilities and do not hinder lobbed projectiles. These hedges can also be destroyed on contact by Brawlers with spawning invulnerability shields.

The hedges can last for a maximum of 10 seconds, and more than one hedge can be active on the arena at a time. If any entity is in the way of the hedges when spawned, they will be pushed out of the way, which also interrupts attacks or Supers (i.e. Frank's attack) when the hedge lands. The hedges will also destroy any bushes it lands on.

Upon activation, if a bush is within 1 tile of Sprout, it gets destroyed to heal Sprout for 1500 health.

"Sprout destroys its current Hedge, but will instantly have its Super fully charged again."

Sprout instantly destroys all of its active hedges, but Sprout will have its Super charged fully again.

"Every 5 seconds, the next Seed Bomb will explode with a larger explosion radius."

Sprout gains a charge bar that takes 5 seconds to fully charge up, and when charged the next attack’s radius increases by 25%, increasing the explosion radius from 4 tiles to 5 tiles. After the attack is used, Sprout's charge bar resets. Unlike most other charging bars, Sprout's Overgrowth's bar starts charging immediately after its last use, and does not require all three ammo to charge, similar to Byron's Injection Star Power's charging bar mechanics.

"Sprout activates a shield, partially protecting itself from all attacks while inside a bush."

While in a bush, Sprout shields itself from all damage by 30%. After exiting the bush, the shield lasts for another 3 seconds. 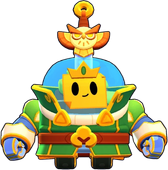 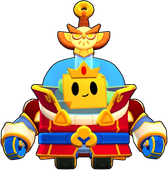