2.67
"Spike throws cactus grenades that send needles flying, and a show-stopping Super: a field of cactus spines that slows down and damages enemies!"

Spike is a Legendary Brawler with low health but a devastatingly high damage output. His attack is a cactus that explodes on impact and shoots spikes in all directions. His Super lobs a thorny projectile that creates a slowing and damaging patch of spikes on the ground. His first Gadget, Popping Pincushion, rapidly fires waves of spikes in all directions around him. His second Gadget, Life Plant, spawns a cactus to provide cover for him and his teammates, and heals them in a radius once the cactus is destroyed. His first Star Power, Fertilize, allows Spike to heal himself over time when he’s inside his Super’s area of effect. His second Star Power, Curveball, causes the spikes shot out from his attack to curve in a circular motion.

"Spike fires off a small cactus that explodes, shooting spikes in different directions."

Spike shoots a damaging cactus that, upon impact with a target or wall, or reaching its maximum range, explodes and sends out 6 spikes radially. The pattern is fixed, with 60 degrees between each spike, and it doesn’t rotate with the projectile's angle. The cactus itself deals as much damage as one spike, and the attack deals devastating damage at point-blank range where more spikes can hit the enemy.

"Spike lobs a thorny grenade. Enemies caught in the blast area take damage and are slowed down."

Spike lobs a thorny grenade over obstacles that, upon landing, creates a circular patch of spikes on the ground that lasts for 4.5 seconds. Enemies within its area of effect take damage over time and are slowed.

"Spike shoots 3 waves of needles in all directions, dealing 520 damage per hit."

Spike shoots 10 needles in all directions per wave, and each needle deals 520 damage to enemies. These spikes aren’t affected by his Curveball Star Power and travel 6.67 tiles before disappearing. The spikes do 15600 damage altogether.

"Spike grows a large cactus with 1750 health to give cover to friendlies. If destroyed, the cactus bursts, and all nearby friendlies recover 1000 health."

Spike spawns a large cactus that has 1750 health. If the cactus is destroyed, the plant bursts and heals all allies in a 3.33 tile radius for 1000 health. If Spike places down another cactus, the initial one will be destroyed and will heal allies.

"After using Super, Spike regenerates 800 health per second by staying in its area of effect."

This Star Power allows Spike to heal 800 health per second by standing in his Super’s area of effect for a total of 4000 health. This Star Power only affects the Spike that planted it.

"Spikes from the cactus grenade fly in a curving motion, making it easier to hit targets."

The spikes shot from his main attack now move in a curving clockwise motion instead of straight out, allowing Spike's attack to cover a larger area and ultimately hit more targets with his attack. This Star Power also effectively increases the range of the spikes. 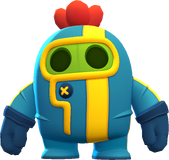 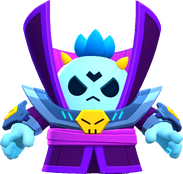