View source
watch 02:17
New Pokemon Games - The Loop
Do you like this video?
Play Sound

3 seconds
"This boxing botanist will plant her feet and go toe to toe! Her Super gives her tough, vegan protective gear."

Rosa is a Rare Brawler who has high health and a high damage output. Her attack is a flurry of three short-ranged punches from her boxing gloves. Her Super grants her a momentary but significant damage-reduction shield. Her first Gadget, Grow Light, spawns bushes around herself. Her second Gadget, Unfriendly Bushes, instantly slows and slightly damages all enemies inside bushes. Her first Star Power, Plant Life, heals her over time when she’s inside bushes. Her second Star Power, Thorny Gloves, adds extra damage to her attack while her Super is active.

"Rosa throws a flurry of powerful punches with perfect technique!"

Rosa throws a flurry of three short-ranged, piercing punches in a wide arc, dealing moderately high damage. Since she has a short range, Rosa must maintain close range of her targets in order to damage them. The attack takes 1.05 seconds to complete, which slightly hinders her ability to deal immediate damage.

"Rosa gets a second skin of tough vine for 3 seconds, decreasing all damage received by 70% for the duration."

Upon activation, Rosa gains a shield that reduces all damage she takes by 70% for 3 seconds, along with an altered appearance.

"Rosa fertilizes the ground around her and bushes instantly grow to provide great cover."

Upon activation, Rosa instantly grows a 3-by-3 section of green bushes where she is standing. These bushes stay indefinitely unless they are destroyed by any obstacle-destroying ability, the Supers of Sprout or Amber, after a goal is scored in Brawl Ball, or after a round is over (in certain events). They can’t grow over obstacles or beneath the safe in Heist.

"All opponents hiding in bushes take 100 damage and get slowed down for 3 seconds."

"Rosa recovers 200 health per second when inside a bush."

Rosa heals 200 health for every second she’s inside a bush.

While Rosa's Super is active, Rosa's attack gains 220 extra damage per punch, giving a total of 660 more damage per attack. 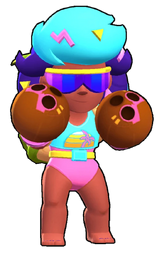