0.67
"Rico fires a burst of bullets that bounce off walls. His Super is a long barrage of bouncy bullets that pierce targets!"

Rico (formerly Ricochet) is a Super Rare Brawler with low health but a moderately high damage output. Both his attack and Super fire bullets that can bounce off of walls and continue traveling. If used correctly, Rico can defeat enemies around walls without coming under enemy fire. His first Gadget, Multiball Launcher, blasts waves of bouncy bullets all around himself. His second Gadget, Bouncy Castle, allows his next attack to heal him each time one of its bullets bounces off of a wall. His first Star Power, Super Bouncy, grants extra damage to his bullets from his attack or Super if they bounce. His second Star Power, Robo Retreat, increases his movement speed when his health falls below 40%.

"Rico's bullets bounce off walls, gaining range. They can hit enemies behind cover."

Rico fires a burst of five bullets with a slight spread that can bounce off of walls. Each bullet can bounce up to 3 times, and they each gain 1.67 tiles of additional range for every bounce. This attack takes 0.95 seconds to complete.

"Rico fires a long burst of bullets that pierce through enemies and bounce off walls, gaining range."

Rico’s Super fires a larger, longer-ranged burst of twelve piercing bullets with a slight spread that can bounce off of walls. Each bullet can bounce up to 3 times, and they each gain 1.67 tiles of additional range for every bounce. Even though the bullets can pierce through enemies, they can only damage enemies once. This Super takes 1.35 seconds to complete.

"Rico blasts waves of bouncy bullets in all directions."

Rico blasts two waves of piercing bullets with a range of 12 tiles all around himself that each deal 320 damage. These bullets behave identically to his Super's bullets, but last for a shorter period. Even though the bullets can hit multiple enemies, they can only damage each enemy once.

"Rico's next attack will heal him for 200 health from each bounce of a projectile."

Activating this Gadget allows Rico’s next attack to heal him for 200 health each time one of its bullets bounces. This counts for multiple bounces from one bullet, and at most, Rico can heal for 3000 health from this Gadget. A Gadget symbol will glow above Rico's head signaling this Gadget's usage, as well as a glowing attack joystick. This Gadget's cooldown starts after this attack is shot.

"Rico's bullets, from attack and Super alike, get supercharged by their first bounce and deal +124 damage!"

If Rico's bullets (from either his main attack or his Super) bounce off of a wall, they will glow and deal 124 additional damage. The bullets can only be supercharged once, and enemies will take regular damage if the bullets aren’t bounced before they hit enemies.

When Rico's health falls below 40%, he runs 34% faster, allowing him to move much faster than most Brawlers and escape enemies more easily. This speed boost disappears when his health restores above 40%. 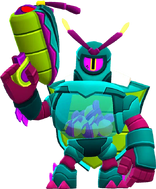