2.67
"Poco fires damaging sound waves at enemies. His Super can heal both Poco himself and his teammates!"

Poco is a Rare Brawler who has moderately high health and the ability to provide immense healing to his teammates, but very low damage. For his attack, Poco plays his guitarrón, sending damaging musical notes within a wide spread and range. His Super fires a larger and faster musical wave, healing himself and any allies within its range. His first Gadget, Tuning Fork, gives out a circular musical wave around him that allows himself and allies in it to heal over a few seconds. His second Gadget, Protective Tunes, cleanses allies from any adverse status effects and protects allies from those effects momentarily in a large radius around him. His first Star Power, Da Capo!, allows Poco’s normal attack to heal allies it hits. His second Star Power, Screeching Solo, allows his Super to deal moderately low damage to enemies it hits.

Poco releases a wave from his guitarrón that takes the appearance of musical notes. The attack spreads out drastically as it travels, allowing it to cover a very large area and pierce multiple enemies caught in it, but deals a very low amount of damage.

"Poco heals himself and all friends he can reach with his uplifting melody. Does not affect enemies."

When his Super is used, he shoots a larger musical wave from his guitarrón that heals him and any allies hit by the wave a very high amount. The wave is much wider and longer than his attack, but has the same cone shape as his attack. This can travel through any Brawler or obstacle. Poco's Super will appear green regardless of their team. Poco's Super can't heal minions summoned by allies (e.g, Mr. P's porters or Nita's bear).

"Poco and all nearby allies heal 400 health per second for 5 seconds."

Poco releases a musical wave in a 3.33 tile radius around him. Poco and allies that stand within that radius are healed 400 health per second even after they leave that radius. If the effect lasts for the entire 5 seconds, Poco and his teammates heal a total of 2000 health from this Gadget without any healing buffs or debuffs.

"Removes active adverse effects from friendly brawlers in a large area and gives a 2.0 second immunity."

Poco cleanses all allies in a 6-tile radius. This removes poisons, burns, stuns, slows, Lou's Frost, and Belle's Electro-Bolts. It doesn’t protect Brawlers from knockbacks and El Primo's Suplex Supplement Gadget. After Brawlers are cleansed, they will be immune to these effects for 2 second.

This allows Poco's main attack to heal allied Brawlers it hits for 700 health, in addition to damaging enemies. The attack’s healing isn’t affected by Power Cubes.

Poco's Super will deal 1000 damage to enemy Brawlers in range, in addition to healing allies. Note that auto-aiming your Super still aims it towards allies instead of enemies. 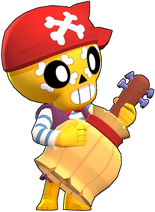