3.33
"Pam shoots from the hip, peppering targets with shrapnel. Her Super is a healing turret that restores her and teammates' health!"

Pam (formerly Mama J) is an Epic Brawler who has high health and can provide a lot of healing to her team, but an inconsistent damage output. Her main attack shoots a spread-out burst of scrap metal in a sweeping pattern. Her Super deploys a turret that heals her and allies within its area of effect. Her first Gadget, Pulse Modulator, triggers her turret to emit a pulse that heals anyone in its area of effect a moderate amount. Her second Gadget, Scrapsucker, allows every piece of scrap metal from her next main attack to remove ammo from any Brawler they hit while restoring Pam's ammo. Her first Star Power, Mama's Hug, allows her to slightly heal herself and allies in range whenever she hits an enemy with a bullet from her main attack. Her second Star Power, Mama's Squeeze, allows her healing turret to deal damage to enemies within its area of effect.

Pam shoots nine pieces of scrap metal in a spread-out volley that sweeps from left to right twice. This wide spread of her attack allows it to hit multiple enemies, but makes it very inconsistent and inaccurate when dealing with one single target at a range. However, at close range she can hit all her bullets and deal very high damage. This attack takes 1.05 seconds to complete.

"Pam's healing turret will fix up her and teammates who stay in its area of effect."

Pam's Super deploys a heal station that heals allies within a medium-sized radius similar to 8-BIT's damage booster radius. However, it can’t heal spawnables like Jessie's turret, Nita's bear, or another Pam's healing station, and it doesn’t stack with other Pam healing turrets.

"Pam triggers her turret to emit a pulse that heals allies inside the turret's range, including herself, for 1200 health."

"Each hit from Pam's next attack removes 25% of opposing Brawler's maximum ammo. Pam reclaims 50% of the ammo for herself."

Upon activation, the projectiles from Pam's next attack will remove 25% of an enemies' maximum ammo. Meanwhile, Pam gains 50% of the stolen ammo to her own ammo bar. If an enemy Brawler's ammo bar is empty, Pam will not receive any more ammo even if the projectiles hit them, but Pam can still remove enemies' ammo even if her ammo bar is full. This Gadget does not work against the Heist safe, the IKE turret in Siege, or spawnables, but it will work against the bosses/robots in Boss Fight and Super City Rampage/Robo Rumble. A Gadget symbol will glow above Pam's head signaling this Gadget's usage, as well as a glowing attack joystick. This Gadget's cooldown starts after this attack is shot.

"Whenever Pam hits enemies with Scrapstorm, she heals herself and nearby friendly Brawlers for 48 health."

Every time Pam hits an enemy with a bullet from her attack, she emits a pulse in a 4 tile radius around her that heals herself and teammates 48 health (432 health in total if all bullets hit). This doesn’t include hits on spawnables such as an enemy Jessie's turret, Nita's bear, an enemy Pam's healing station, Tara's shadow, or Mr. P's robo-porters.

This allows her turret to do 800 damage per second if an enemy Brawler stands within the healing station's healing radius. This includes turrets and other spawnables. 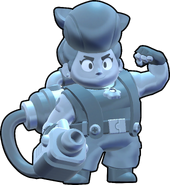 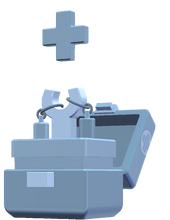