610
"Nita strikes her enemies with a thunderous shockwave. Her Super summons a massive bear to fight by her side!"

Nita is a Common Brawler that is unlocked as a Trophy Road reward upon reaching 10 Trophies. She has moderate health and attacks with shockwaves that have moderate range and can hit multiple enemies. She is most notable for her Super's ability to summon the "Big Baby Bear." This bear has high health and quick, dangerous melee attacks. Her Gadget, Bear Paws, will stun all enemies in an area around her Bear. Her first Star Power, Bear with Me, heals her bear for 500 health when she herself attacks the enemy, and the bear heals Nita for 500 when it attacks the enemy. Her second Star Power, Hyper Bear, increases the attack speed of her bear by 60%.

"Nita sends forth a shockwave, damaging enemies caught in the tremor."
Nita creates a ranged shockwave that deals moderate damage to all enemies that it hits. It has moderate range, and the shockwave is fairly wide, though it does not spread out as it travels.

"Nita summons the spirit of Big Baby Bear to hunt down her enemies."
Nita summons the "Big Baby Bear" to chase down and damage enemies. Using the Super joystick, the player can choose a location near Nita to throw the spell. The bear will then be summoned at that location. The "Big Baby Bear" walks towards the nearest enemy and attempts to hit them with quick melee attacks that does considerable damage. The bear shares the same above average health with Nita.

"Nita commands her bear to slam the ground, stunning all enemies within its reach."
Nita's bear will stun enemies within a certain radius of it, allowing it to catch up to and attack them when this Gadget is used. The Gadget can only be used while Nita has a bear from her Super active on the map. Note that this Gadget only has 2 charges per match.

"Nita recovers 500 health whenever her bear hits an enemy. When Nita deals damage, her bear regains 500 health."
This is passive ability allows Nita to heal herself and her bear. The healing can be maximized by throwing the bear into a large group of Brawlers so it lands more hits to heal Nita. Likewise, Nita can also join in the fight to keep her bear alive for longer, similar to Jessie's Energize Star Power in healing her turret.

"Nita's bear attacks faster. Time between swipes is reduced by 60%."
This allows Nita's bear to deal damage more than twice as fast as it usually would. However, the bear's short melee range and movement speed makes it hard to reach an enemy. 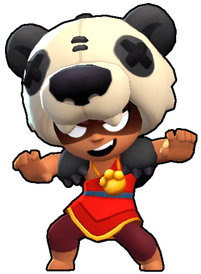