0.7 seconds
"Mr. P is a disgruntled luggage handler who angrily hurls suitcases at opponents. His Super calls robo-porters to help him."

Mr. P is a Mythic Brawler who has moderate health and moderate damage. He attacks with suitcases that bounce upon hitting an enemy and deal additional damage. His Super deploys a home base that periodically spawns a robo-porter that follows and attacks enemies. His first Gadget, Service Bell, significantly increases the damage and health of the current porter. His second Gadget, Porter Reinforcements, spawns a weaker porter at the end of Mr. P's next attack’s range. Mr. P's first Star Power, Handle With Care, allows his attack to bounce at the end of its range even if it doesn't hit a target or obstacle. His second Star Power, Revolving Door, makes his porters spawn sooner when the current one is destroyed.

"Mr. P throws a heavy suitcase with angry intent. If the suitcase hits an obstacle or an opponent, it bounces over them, lands with a bang and deals area damage."

Mr. P throws a suitcase at an enemy. If the suitcase hits a target or an obstacle, it bounces over them, dealing splash damage upon hitting the ground. The bounces extend the attack's range by 3 tiles.

"Mr. P deploys the home base for his robo-porters. He has reprogrammed the small penguin-head robots to attack and harass opponents (and unruly guests)."

Mr. P throws a home base with moderate health. It can be thrown anywhere within a short distance from Mr. P. The home base is stationary and spawns robo-porters with low health and damage to assist Mr. P and his allies. The porters move relatively fast towards the nearest target, and when they get within the range of the target, they stop and shoot it with short-ranged shots. The porters keep spawning until the home base is destroyed. However, there can only be one robo-porter from Mr. P's Super on the battlefield at a time. The home base has a 4 second delay before it can spawn another robo-porter after one is destroyed. There can be only one home base on the battlefield at a time, unless there are multiple Mr. Ps.

Mr. P increases the damage of the current porter by 150 and its health by 1000. This only applies to the one porter on the battlefield. This will also heal the porter to maximum health. The buffed porter appears bigger in size with a purple glow on it (similar an Energy Drink effect). Mr. P must be within 12 tiles of his current porter to use this Gadget. Buffs are only applied to a porter once.

"The next attack will spawn a weak porter where the attack lands."

Mr. P's next attack spawns a porter mechanically identical to his Super at the end of the attack's range. Porters spawned from this Gadget have half the health and deal 77% the damage of a porter spawned by Mr. P's Super. They’re also visually smaller than their Super counterparts. The porters spawned from his Gadget won’t despawn even if Mr. P uses another Gadget, allowing multiple porters to be on the battlefield at once. His attack still deals its base damage before spawning a porter, and this Gadget can be affected by his Handle With Care Star Power and Power Cubes. A Gadget symbol will glow above Mr. P's head signaling this Gadget's usage, as well as a glowing attack joystick. This Gadget's cooldown starts after this attack is shot.

"Mr. P's overstuffed suitcases bounce and burst even if they don't hit a target or obstacle."

This Star Power allows Mr. P's attack to bounce even if it doesn’t hit any target or obstacle. This increases his maximum range to 10 tiles; however, there is a break-point after the bounce which slows down the attack and decreases the unload speed. This Star Power affects the spawn point from Porter Reinforcements.

"The robo-porters spawn 3 seconds faster after being defeated."

This Star Power makes the porters spawn faster when the one is defeated. Normally, after a porter is defeated, it takes 4 seconds to respawn, but Revolving Door cuts it down by 3 seconds, so a new one spawns 1 second after the previous one is defeated, making them respawn a lot more faster. 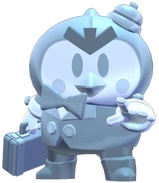