30.15%
"Mortis dashes forward with each swing of his shovel. As his Super attack, he sends a cloud of bats to damage enemies and heal himself!"

Mortis is a Mythic Brawler who attacks by swinging his shovel, dashing a few tiles forward and dealing damage to enemies in his path. For his Super, Mortis summons a swarm of bats that drain the health of his enemies while restoring his own by that amount. Mortis has a moderate amount of health and a low damage output, but can move incredibly quickly. His first Gadget, Combo Spinner, allows him to spin quickly, dealing 1300 damage to all enemies around himself. His second Gadget, Survival Shovel, doubles his reload speed for 4 seconds. His first Star Power, Creepy Harvest, heals himself for 1800 health when he defeats an enemy Brawler. His second Star Power, Coiled Snake, allows him to charge a yellow bar when his ammo is full, which grants him a 75% increase in his dash range when the bar is fully charged.

"Mortis dashes forward with a sharp swing of his shovel, creating business opportunities for himself."
Mortis dashes forward a short distance, dealing moderate damage to any enemy Brawlers in his path. Mortis cannot perform his attack without dashing unless he dashes toward a nearby wall. This attack is technically a melee attack, but the dash effectively gives it a short range. It has a very slow reload speed.

"Mortis calls forth a swarm of vampire bats that drain the health of his enemies while restoring his. Creepy!"
Mortis will shoot bats in a single direction. If the bats come in contact with an enemy, they deal damage and heal Mortis equal to the damage dealt. Mortis will heal the full amount possible for his level of Super even if the enemy hit has less health left than its maximum damage, but if the bats miss, Mortis does not heal. Mortis also heals when hitting an enemy spawnable, but doing so will not charge his Super. The bats move quickly, pass over walls, and travel a long distance making this a hard attack to avoid. If the bats hit multiple enemies, they deal the full damage and the heal Mortis receives is multiplied by the number of enemies hit, making it possible for Mortis to heal himself dramatically if the bats hit several enemies.

"Mortis spins his shovel, hitting all enemies around himself for 1300 damage."

Mortis spins around on the spot, damaging all enemies in a 3.33 tile radius for 1300 damage. He can move, but cannot use his attack during this Gadget's duration.

Upon activation, Mortis will appear red and double his reload speed for 4 seconds. This allows Mortis to deal more damage to enemies or simply use it to boost his movement to get away from other enemies or quickly dash to a certain location.

"Mortis reaps the life essence of a Brawler he defeats, restoring 1800 of his health."

While active, he heals himself 1800 health after defeating an enemy Brawler.

"Mortis gains a Dash Bar! His dash range is increased by 75% when the bar is fully charged. It takes 3.5 seconds for the bar to charge when Mortis has all three dashes ready."

When Mortis has his ammunition bar full, a dash bar will start charging, which can be seen below the ammunition bar. The bar takes 3.5 seconds to fully charge, and once it fully charges, his next attack's dash range is increased by 75%, allowing him to travel further distances.

Top Hat (Free for everyone) 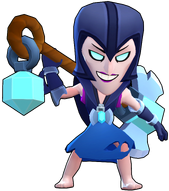