12%
"Darryl has a powerful double-shotgun attack. His Super move is a reckless roll inside his bouncy barrel!"

Darryl is a Super Rare Brawler who has high health and a high but inconsistent damage output. He attacks by shooting shotgun shells that deal very high damage at close-range. His Super allows him to roll for some distance, damaging enemies and bouncing off walls. His Trait helps his Super charge automatically over time. His first Gadget, Recoiling Rotator, makes Darryl spin around and shoot a barrage of pellets around him that slightly charge his Super. His second Gadget, Tar Barrel, emits tar around him that slows enemies. His first Star Power, Steel Hoops, grants him a drastic damage-reducing shield while using his Super. His second Star Power, Rolling Reload, momentarily doubles his reload speed after using his Super.

"This Brawler charges Super over time."

Darryl's Super will charge itself over time similarly to Edgar. It takes 30 seconds to fully charge his Super without other Super-charging abilities.

Darryl fires 10 shells in 2 waves from his shotguns that deal medium-high damage. This attack deals more damage at close quarters because more shells can hit the enemy, dealing the highest consistent damage out of all Brawlers at point-blank range. This attack takes 0.8 seconds to complete.

"Darryl rolls forward inside his barrel, knocking back enemies and bouncing off walls. His Super recharges over time!"

Darryl rapidly rolls a short distance, bouncing off walls; however, unlike Rico's attack and Super, the distance isn't increased after bouncing off a wall. He can roll through water, but not through rope fences or other obstacles. Enemies hit by a rolling Darryl get knocked back and take minor damage. Darryl can pierce through multiple enemies in one roll, and can hit the same enemy multiple times by bouncing off walls.

"Darryl spins around and sprays a barrage of shots in all directions. Each shot deals 400 damage and recharges his Super by 25% if it hits enemies!"

Darryl spins in a circle, quickly unloading 15 single shells around himself. Each shell deals 400 damage and has a range of 9 tiles. Each shell that hits an enemy charges 25% of his Super.

"Darryl creates a slowing area around himself for 5.0 seconds."

Darryl emits a wave of tar all around him. Its 2.67 tile radius is quite small, but it moves around with Darryl. Enemies inside its radius are slowed down. Tar Barrel lasts for five seconds and can still be used while using Darryl's Super.

"Darryl's Super reinforces his barrel, reducing all damage he takes by 90% for 0.9 seconds."

While using his Super, Darryl is granted a shield that reduces damage taken by 90%. The shield lasts until Darryl stops rolling.

"When Darryl uses his Super, he doubles his reload speed for 5.0 seconds."

After Darryl uses his Super, he doubles his reload speed for 5 seconds, along with a slightly larger and reddened appearance. 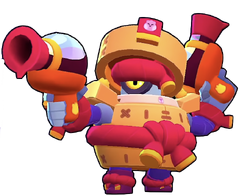 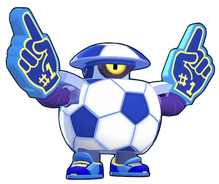 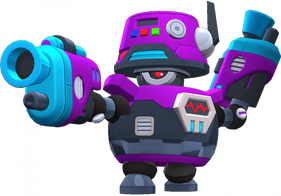