"Can you beat the formidable Boss Robot?"

In the Boss Fight Event, three players battle against a gigantic Boss Robot. The battle starts immediately and slowly becomes more difficult. With each win, the difficulty increases in the next level. The Boss robot uses a wide range of attacks and has a colossal amount of health. A timer is shown to keep track of anger levels and to compare times with others. Boss Fight is an unranked mode, so Trophies can’t be earned or lost. If you are playing with teammates, the level is set to the lowest that the members of your team have reached. Brawlers' attacks, Supers, idle charging, and other abilities are 70% less effective at charging Supers in this mode. 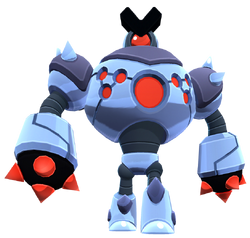 Every time you beat the Boss, it gains more health, damage, and abilities. The last Boss that you can challenge is Insane XVI.