2391
"Bo fires three explosive arrows toward his targets. His Super ability places a trio of hidden, explosive mines on the ground!"

Bo is a Common Brawler unlocked as a Trophy Road reward upon reaching 3000 Trophies. He has moderate health, immense utility with his Super, and a potentially high but inconsistent damage output. He attacks by firing three long-ranged arrows that explode in a small radius at the end of their range. His Super places three traps that can be triggered to explode a moment later by being walked on by an enemy, damaging and knocking enemies back upon exploding. His first Gadget, Super Totem, places a totem that slowly charges the Supers of Bo and his allies while inside its area of effect. His second Gadget, Tripwire, manually detonates his traps. His first Star Power, Circling Eagle, increases his field of view into bushes. His second Star Power, Snare a Bear, causes his traps to stun enemies momentarily instead of knocking them back.

"Bo releases a trio of exploding arrows, tearing up enemies like an eagle's talons."

Bo shoots three explosive arrows at a long range that can deal moderately high damage to enemies within a 1-tile splash radius. They are fired with a small sweeping spread from left to right. The attack takes 0.85 seconds to complete.

"Bo hides explosive traps in the ground. When triggered by an enemy, the traps explode after a short delay, knocking back and damaging enemies."

Bo lobs an arrow over obstacles that lays three mines on the ground upon landing. The mines are momentarily shown, before becoming invisible to enemies until they are triggered, and the traps are still visible to teammates. They trigger when enemies travel on their radius and explode 1.15 seconds later, dealing damage, destroying nearby obstacles, and knocking back any enemies inside its 2 tile blast radius. When triggered, they will beep and flash before exploding.

"Bo drops a totem that recharges his and any allies' Supers within the area of effect. The totem slowly loses its health over time."

Bo drops a small totem pole that will recharge his and any allies' Supers 5% per second within its area-of-affect. A total of 20 seconds is needed to recharge a full Super with this Gadget. The totem has 1000 health and a radius of 2.67 tiles, and it decays for 50 health per second until it is destroyed. The previous totem is immediately destroyed if Bo places another totem. The charging effect will stack with other passive Super charging abilities like another Bo's totem and the passive Super charging abilities of Darryl and Edgar, such as Edgar’s Let’s Fly Gadget.

"Bo triggers all of his mines after 1.5 seconds. During the delay the mines are completely undetected to opponents."

Bo's traps will automatically explode 1.5 seconds after this Gadget's activation. This detonation has the same effect as when triggered by enemies, and activates Bo's Snare a Bear Star Power; however, enemies can’t see the mines before detonation and an enemy walking over the mines in the 1.5-second delay will not trigger them.

"Instead of a knockback, Bo's traps now stun the enemy for 2.0 seconds!"

Bo's traps now stun enemies for 2 seconds instead of knocking them back, rendering them vulnerable. The stun does not stack; instead, it starts over when another mine hits an enemy.

Warrior (Free from the Duo Showdown challenge, or 29 Gems) 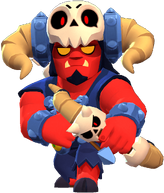