3.33
5 (with Boosted Booster)
"8-Bit lumbers along like an arcade cabinet on legs. He shoots Blaster Beams and his Super boosts friendlies' damage!"

8-Bit is a Common Brawler who is unlocked as a Trophy Road reward upon reaching 6000 Trophies. He has high health and a high damage output, but suffers by having the slowest movement speed of any Brawler. He attacks by firing long-ranged, high-damaging laser beams. His Super spawns a Damage Booster which boosts the damage of him and his allies within its radius. His first Gadget, Cheat Cartridge, instantly teleports him to his Damage Booster. His second Gadget, Extra Credits, triples the amount of lasers his next attack fires. His first Star Power, Boosted Booster, significantly increases his Damage Booster range and damage boost. His second Star Power, Plugged In, increases his movement speed while within a radius around the Damage Booster.

"Shoots a burst of Blaster Beams that damage any opponent they hit. The beams have medium range and a slight spread."

8-Bit shoots a long-ranged burst of six laser beams with a small spread that deals little damage each. If all 6 beams hit, he can deal a high amount of damage. The attack has a slow unload speed, taking 0.75 seconds to complete.

"Deploys a turret that increases the damage output of all friendly Brawlers in its area of effect."

8-Bit deploys a turret that increases the damage output of himself and allies inside its radius by 35%. This also increases Byron's healing attacks and healing Supers, but doesn’t affect spawnables or other entities (such as Nita's bear, Jessie's turret, the Siege Bot, the IKE Turret, etc.) and doesn’t stack with other 8-Bit’s Supers, nor does it affect Gadgets or Star Powers such. If a Brawler's abilities make them move out of the radius, such as Bull's and El Primo's Supers, and they were previously inside the Booster, then the damage boost is applied. For an allied Colette, Damage Booster buffs are applied after her base damage is calculated.

8-Bit instantly teleports to the location of his booster. He has to be within 12 tiles of his booster to be able to use this Gadget. He retains any status effects while teleporting.

"8-Bit's next attack has the number of projectiles increased to 18."

After activation, 8-Bit's next attack shoots 18 lasers instead of 6, dealing 3 times the damage of his normal attack in a single attack if all of the lasers hit. Since his attack fires triple the amount of projectiles, the attack takes thrice as long to complete. A Gadget symbol will glow above 8-Bit's head signaling this Gadget's usage, as well as a glowing attack joystick. This Gadget's cooldown starts after this attack is shot.

"Increases the Damage Booster's range by 50% and boosts damage by an additional 15%."

This increases the radius of the Damage Booster to from 3.33 tiles to 5 tiles, allowing it to cover more ground, as well as boosting the damage boost from 35% to 50%.

"When 8-Bit is near his Damage Booster, he will plug in and have increased movement speed."

V8-Bit (Free from the Retropolis Challenge or 79 Gems) 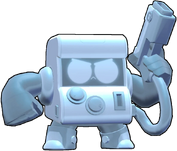 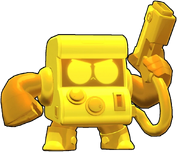