Nani is a play on "Nanny"

@GAK16 , first answer makes sense, although I'm hoping its your second one.

So I notices this the other day, and I was wondering if anyone knew what it was. I'm sure that there is a video breaking every detail of the loading screen down, but I didn't see it so I'm asking.

Well, I'm stuck inside so I may as well do something that can be considered social.

Bo-Lay in Wait: Bo can now have two Supers active at once.

8-Bit-Wall Glitch: 8-Bit's shots can now travel through walls, but their travel speed and damage is reduced by 15% when doing so.

Well, there we go, my shower thoughts are now in the world.

@GasterZX , it seems like it would be broken, but there are 3 things to consider:

With the expection of Blinding Storm, which is still pretty good, these are allreidiculously good.

@CanineEmporer , you are asking the right questions.

@GAK16 , sorry if it sounded like I was accusing you of copying, that was not intention, I just meant to point out it was powerful with your own logic.

For Polly, yeah, I meant for it to be do the damage because of the Star Power.

It's extremely rare, I think rarer than getting a legendary after reseting your luck value.

For Poco's encore, does his ammo bar have to be full? And I'm just going to point out what you did for mine called "Quartet". This is extremely powerful because of how easy Poco's attacks are to hit. So if you were to do this once and get his super, Poco would then become a machine gun after he recovered all his ammo, since he would just be able to continuously attack and then recover ammo.

And a suggestion for a Star Power for Polly:

And I vote for Booming Barrage and Bibi's first Star Power.

All in all this amazing and I agree with Jellyattack2.0

A reply to Cristian Tanase
0

Double Cartridge: WTF!!! This is more broken then Snappy Sniping.

Stunning Punch: Also very powerful, as they will have very little time to recover and will almost immeditaley be hit again.

Iron Heart: This one is very well balanced and not out of quesiton since Bea has something similar.

Brave: Yeah, no. This makes her arguabley the most powerful brawler considering her turret's attack speed.

Instable Rockets: This looks very similar to one I posted a while ago called Detritus.

Another One: This one is really good to.

New Processor: I like the idea, but that may be a little to powerful.

Bigger Bottle: Another good one.

Steel Fists: I like the idea, but is the shield only when attacking or does it linger?

Hot Soup: Fun idea, but this is even better than Poco's Super, and it's just a standard attack. Maybe nerf it a little.

Plants on Me: First: during her entire super? Holy ****. Second: Make it within a certain radius of her, or nerf the damage cause that's pretty crazy.

Big Barrel: Fun idea, maybe make it stun though since airborne makes them immune to damage.

Small Bullets: A good one.

2 THings in One: WHen he throws it, say his super damage is reduced by 50% until it returns, or something similar.

Breaked: This is really good but not broken.

Mind: I really like this one: it makes her attack more likely to hit without being broken.

Spy Made: Fun idea: Leon, eat your heart out.

Playful Bats: This one is good and makes Mortis more viable. Does this poison count towards Super charge?

Full Deck: Reminds me of one I saw called 4 Suits

New Age: I love this one, and assume they bounce like Mr. P's.

Spike Storm: A simple idea that is great.

More of Those: Hmm, potentially very powerful, but at the same time the .15 makes it kind of balanced.

Sand in the Eyes: Make it so they can't see them based on proximity, but can still see where the attacks come from.

Assassin Born: I came up with a similar one, but did it differently. Yours is more powerful.

A reply to King Dragonhoff
0

@GasterZX I know it's Mr. P. I just wanted to say that as a Phineas and Ferb reference.

I really like the idea of Mortis', but that could be a little too good.

Tara is very good and would make her an extremely popular brawler.

Gene's is cool. I made a teleportation one for him, but that was purely for escape, while yours allows more free travel.

I really like the Mr. P Star Power, it probably wouldn't be able to spawn both at once, but that'll be good.

@GAK16 , thank you for the great feedback! For Frank's name, yes the Hulk. For Carrion Crow I didn't realize. For New Boots, SHelly is a bit odd when making a Star Power, at least for me, cause she doesn't have a special gimmick: she just shoots a gun and shoots it harder. I know this can be said for others, such as Colt, but I see the same problem with him: they are both super plain.

Penny's is extremely poorly worded. Its suppose to be the explosion radius of the cannonball, not the overall attack radius.

For everything else, thanks! I feel like these are the best ones ive come up with and it's nice to see confirmation.

True. I should have specified primary attack.

Dang, I knew there was a reason it sounded good. Thanks.

When 8-Bit puts down his booster, it grants an additional 15% damage for the first 10 seconds.

When Bea uses her Super, she recovers 560 hitpoints.

The explosion radius for Bo’s mines increases by 1 tile, but the detection radius remains the same.

When Brock’s missile travels its full range, it gets stuck in the ground, exploding once a brawler walks over it or after 6 seconds.

Bull: By the Horns

After using his Super, Bull gains a 15% damage increases for 6 seconds.

When using his Super, Carl tears up the ground behind him, causing it to slow down enemies that walk in it by 30%. This lasts for 8 seconds.

Colt deals an additional 50 damage with each bullet.

When Crow kills an enemy, he regains 600 hitpoints.

Darryl’s super takes 2 fewer hits to charge, and his passive charge speed is decreased from 30 seconds to 24 seconds.

Dynamike’s sticks of dynamite explode as soon as an enemy brawler walks over them.

Frank hits the ground harder, causing his shockwave to travel an extra tile (affects his Super).

Gene gains a charge bar that charges over the course of 20 seconds. When this charge bar is full, Gene will teleport 4 tiles away from the nearest enemy brawler when his hit points are reduced below 25%.

When an enemy is within 2.5 tiles of Scrappy, they take an additional 175 damage from each of Scrappy’s shots.

If Leon attacks while he still had his invisibility, his attack does an additional 20% damage.

When Max has full ammo, she gains a charge bar that takes 8 seconds to charge. If she attacks when it is full, she instantly reloads 1 ammo.

When Mortis has his Super ready, his lantern glows brightly. Whenever he hits an enemy brawler during this time, they are stunned for .2 seconds.

When Mr. P’s Penguin Drones are destroyed, they explode in a 4 tiles radius, dealing 600 damage.

Pam’s healing turret has its healing radius decreased by 2 tiles, but it now launches healing orbs with a range of 6 tiles. These orbs heal what the turret normally does, and fires as fast as Scrappy.

When Piper kills a brawler with an attack, she deals an additional 1500 damage (at max range) for 6 seconds

Poco’s Super excites his allies, increasing their movement speed and damage by 10% for 5 seconds.

Rico’s attack now explodes when they hit a target or reach the end of their range in a 1 tile radius, dealing full damage to all brawlers in that radius. (Replaces normal damage.)

When her Super is active, Rosa reflects 50% of the negated damage back at her attacker.

Spike’s spikes get stuck in their targets, dealing an additional 80 points of damage per spike every second for 2 seconds.

When Tara uses her Super, she gains 3 floating cards around her that last for 10 seconds. During this time, if she is attacked, 1 card will shoot at the attacker for each time she is hit, each doing 735 damage.

Tick’s mines travel 30% faster when in the air.

This is probably the last big post of Star Powers I make. 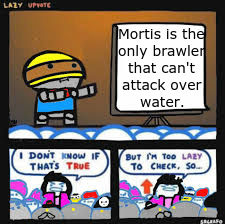