Dude you don't need people to be nice to Spike he's hella op. Just play him well. Tank counter, use your super for area control, hit around walls with the spike. ez

@CanineEmporer You are allowed to do this, but you cannot present it as a fact, you must make it clear it's a fanfic.

@TeleTrickster clearly ozann07 got a legendary and KingK211 got a new brawler as well. Hope you get lucky!

This means I can finally add meaningful tips to the Crow Page instead of having to try them. Good luck everyone with securing your own Legendaries in 2020!

Opened the end of season star points mega box (ik it's a waste of star points but it's the end of the decade so i did it) and a Wild Crow appeared. I'm really happy. Good luck getting your own legendaries in the new year! 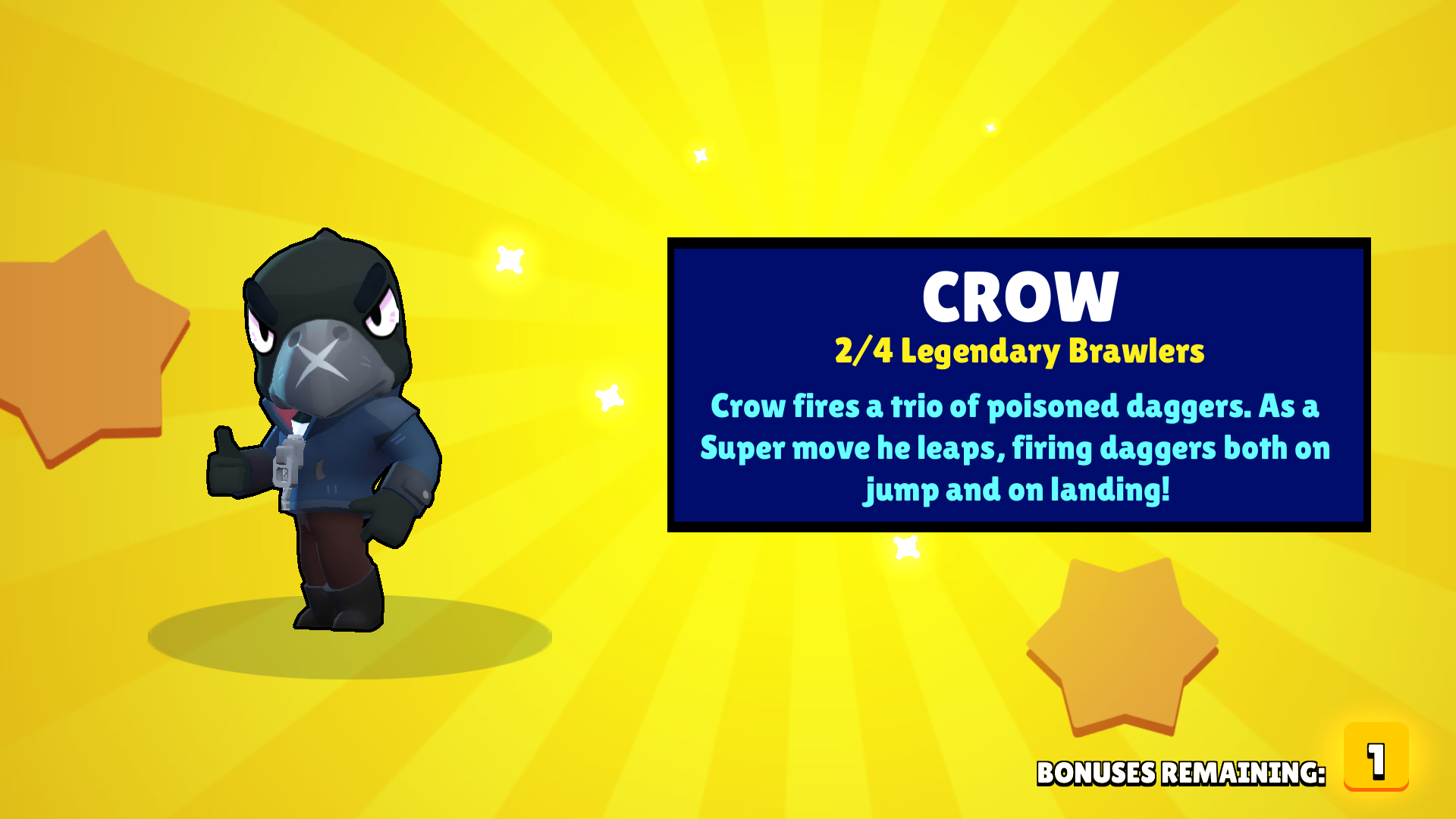 If you like this post you will have good luck in 2020 and get a legendary as well, except you wont... Unless? It can't hurt right?

@Thecrazybone Mortis is definitely a extremely high skillcap brawler. Max is kinda just "spam autoaim" and save ur super for when u rly need it. However, as to "AI mortises are better than real mortises" that's because Mortis is hard to play and most people are bad at him, and that is why the Mortis page here on Fandom has so many incorrect tips

That shouldn't be possible because the early draws are predetermined

Is this a post designed to make people rage?

A reply to Abdou pro XD
1

Lol all incorrect. Max is good in Showdowns ON THE CONDITION that he is a decent power level. His damage is simply too weak for the start of the game.

Currently, your best bet is Present Plunder, in which he is A tier, and Brawl Ball, in which is a A tier as well.

A reply to Jayde god
0

@Minarixkusx Frank is map dependent so when you look at everything averaged out he isn't good on anything, but when you factor in specific maps he is great on some and trash on others.

@TeleTrickster I used to watch OJ for the clash content, then when I started brawl (at global OJ wasn't doing BS videos yet [that came out wrong]) I watched Coach Cory. I quickly decided he wasn't a great choice and switched to KT. Then OJ starting splitting his content and I watch both. With finals week coming up (next week) for my hs, I haven't had time to watch either very much but yes, I agree that those are some of the best youtubers out there. Ash is a very professional player but he doesnt have the charisma to mantain a huge following

@Lleyton Lee The point of the giveaway is to get people to help out with the wiki, which is why only quality edits are allowed not spam.

A reply to King Dragonhoff
1

Also, PSA: Please, when you are making edits, stay away from the Mortis page. There are so many tips by people who think they play Mortis well that haven't been screened properly, so anyone who checks the Mortis page for info will get tons of incorrect strategies. I fixed the worst bits but there's still quite for me to do. Anyone who has had Mortis 650+ trophies (brawler trophies not total) I welcome your suggestion and edits as long as they aren't sarcastic or plain wrong.

A reply to Lleyton Lee
0

Nametags are determined by when you created your account. The first every brawl stars account (Chief Pat) has only 3 digits; Mine has 8 because I joined at Global, and the longer you wait, the longer the tag becomes. Since no one has the same tag, eventually the combinations for 3 will be used up, so they go to 4, and when the combinations for 4 are used up, they go to 5, and so on and so on.

@Zombifier360 Actually he did it correctly. In case you haven't noticed, there is a Club Recruitment part of posting, and he put it in that thread, meaning this is promotions for your club are totally allowed.

And @Ahegoface96 the discord link is expired. Posting discord links wont work because by 1 day max they expire

I simply want to have the opening bars to Megalovania added as a Poco voice line. So... Undertale

The charge for super must be decreased. Tara used to be the only brawler that could pull a brawler and her super was rated as the most impactful super overall, which is why it needed to be so hard to get. However, with the addition of Gene, Sandy, Pam/8-Bit combos, and recent Frank buffs, it isn't as game changing as it was last year. Tara needs some balance changes for sure.

Also @TeleTrickster I'm sorry I played so badly a couple days ago. Usually I play on my Ipad pro but that morning I was sideways in bed with a tiny samsung phone. Not my best gameplay. Usually during weekends in the afternoon I can grind so perhaps we can try that again sometime.

A reply to I want Sandy
0

@Minarixkusx Incorrect. Crow is viable in Gem Grab, Showdown, Brawl Ball, and Bounty. Frank is viable in Brawl Ball, Gem Grab, and half the Siege maps. I find the KairosTime, pros, and Brawl stars data collab website to be helpful: brawlstats.com

It pulls game data and KT organizes it with the some of the most respected Brawl Stars players out there like Lukiebear, Olive Oil, and I think Ash?