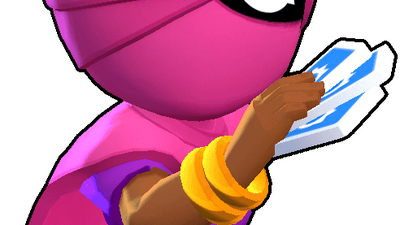 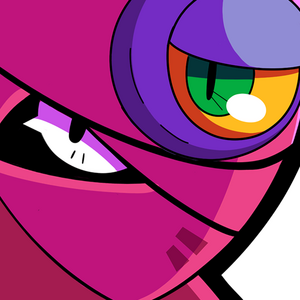 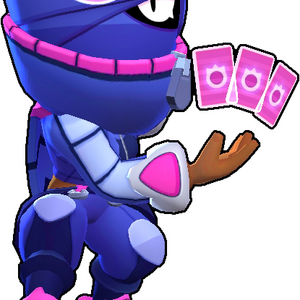 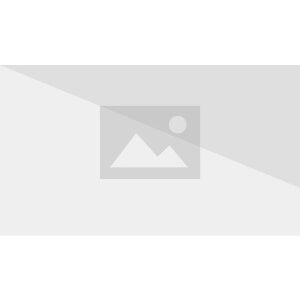 Sandy: Hey Tara can you tell me a story?

Sandy: Thats boring. Hey gene, can u tell me a story?

Sandy goes to the number 1 champion at storytelling....

Is there anyone in majorlazer that has tara and her star power? i need a good matchup with mortis and im just getting dynamikes now.

I also need someone who can play 3v3 well

Pushing mortis is tiring and it sux when you get trash teammates so i need a little bit of help.

After examining it, here’s what I thought 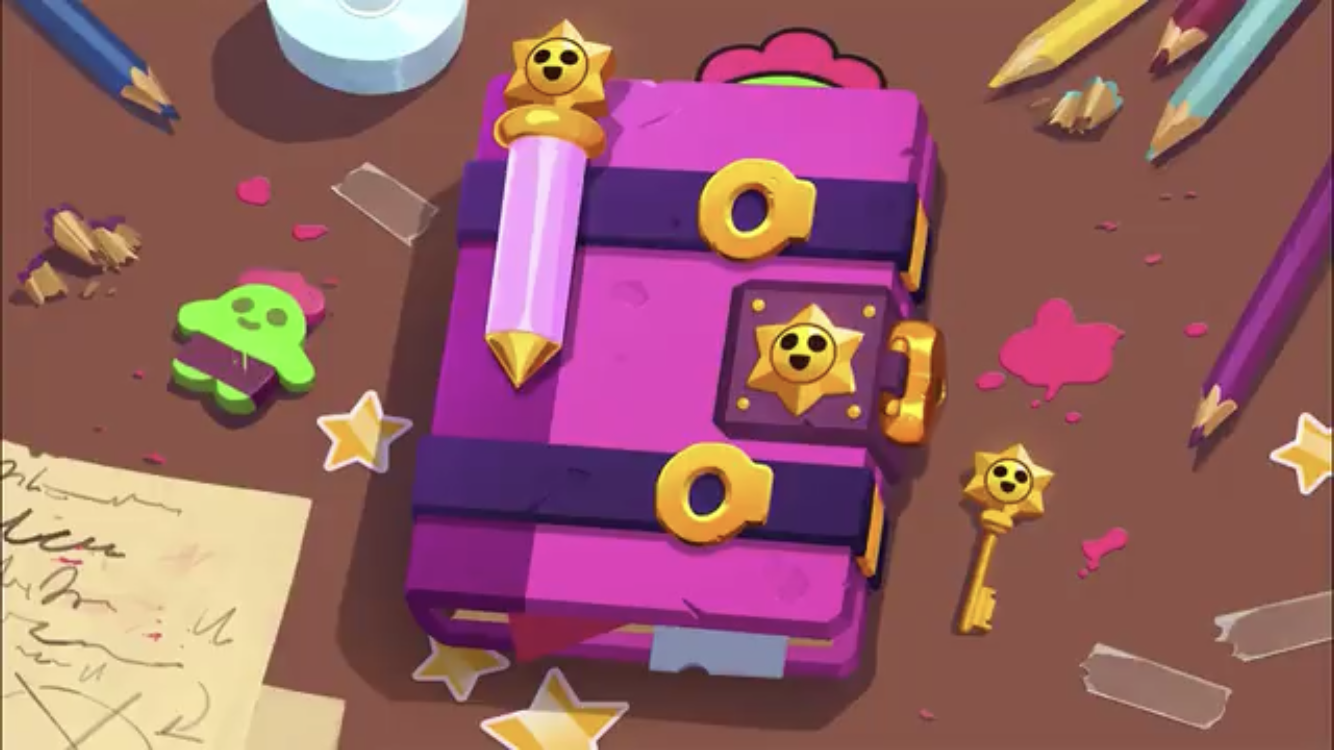 This is probably a diary or a scrapbook. There’s nothing really interesting here, apart from a smiley face instead of a skull as the Brawl Stars logo. 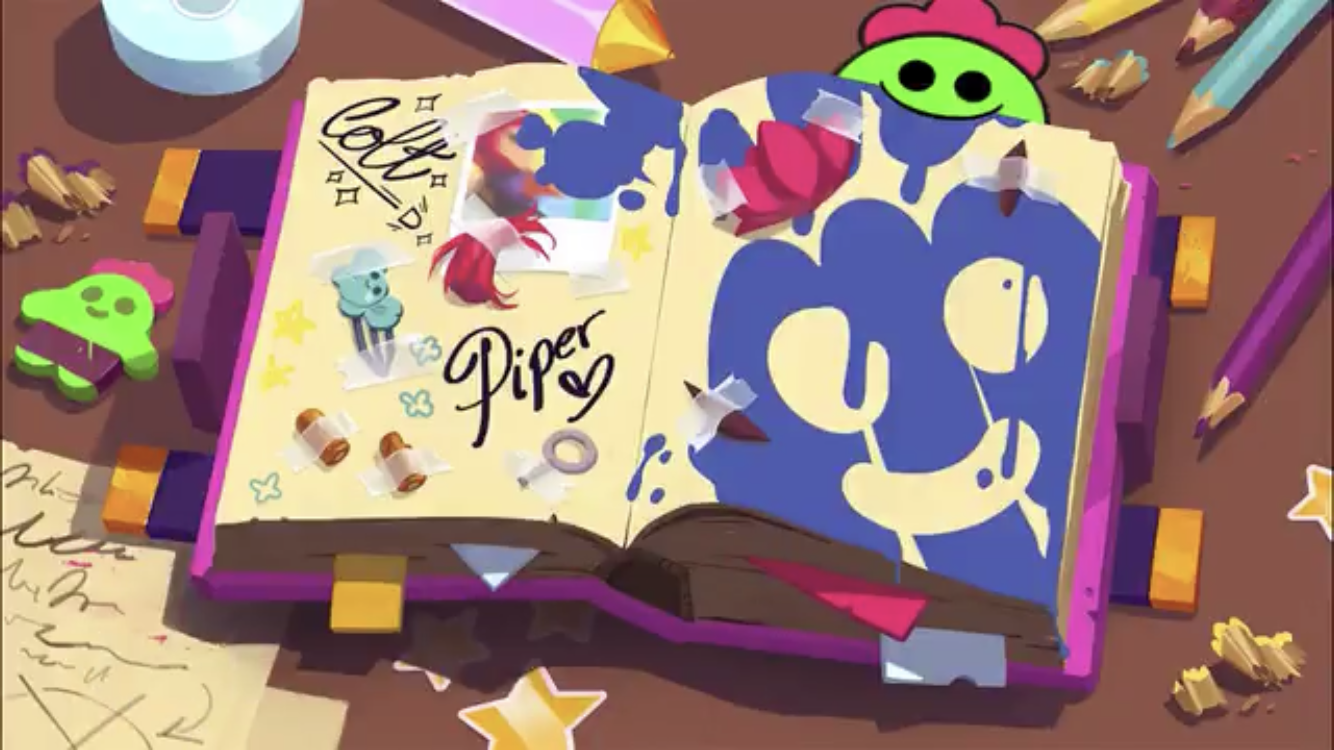 This is where it started to get a bit interesting; we can see a picture of Colt and maybe someone else covered in blue paint, Piper’s signature, her locket, her bullets in her gunbrella and a lollipop-looking shape. There is also a painting of Spike instead of a signature because it probably can’t write. 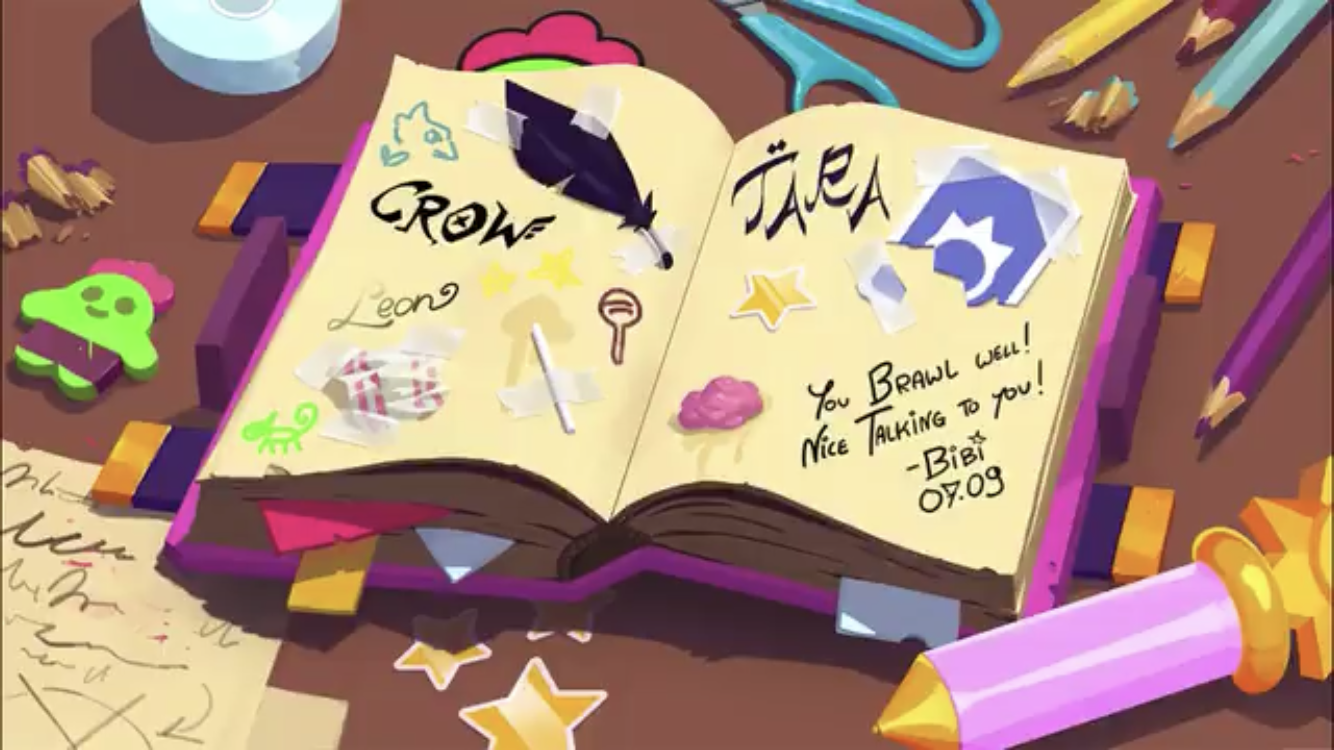 On the next page, we can see Crow’s signature, his feather as a kind of souvenir and a small drawing of him 🦅. We then see Leon’s signature, a small chameleon drawing and a lollipop wrapper and stick🦎🍭.

Tara has written her signature, left one of her cards and there’s a star underneath her name because Tara translates to ⭐️ in a different language (I’m not sure which language, tell me in the comments).

Edit: the language is Hindi

Bibi’s bubblegum is also in this book, followed by the most important thing in it:

Nice talking to you!

In conclusion, I think that the theme park theory/Starr Park is true, and a massive fan visits the park all the time, nevertheless ❤️ and 💀 probably mean “I love Brawl Stars” or “Die Hard”. The Brawl Talk date is on Monday, 7th September, which would actually make sense because the last mini update in November happened on the 21 Nov 2019 on a Monday. 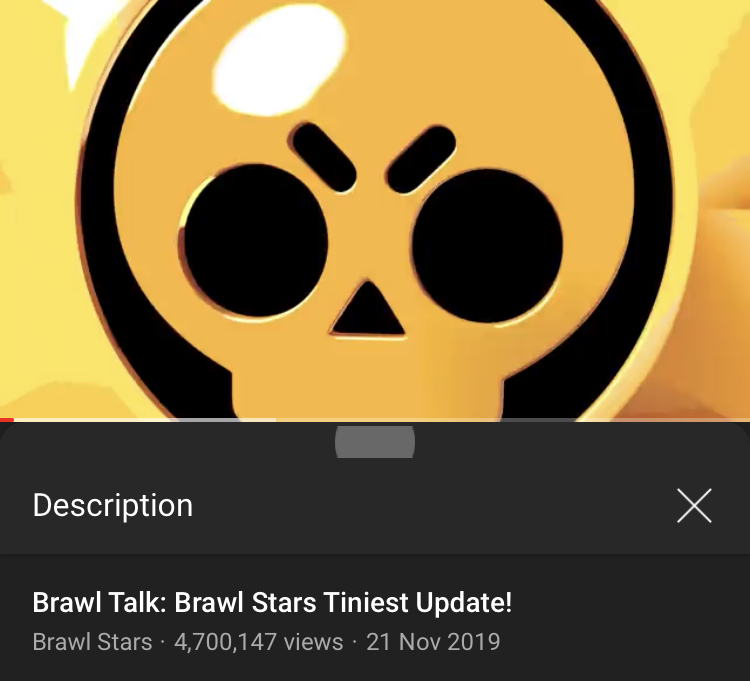 Season 3’s name could be related to Starr Park or the theme park theory.

This is definitely a sneak peek to this upcoming update/future updates, Dani even confirmed it in one of Chief Pat’s videos where he said the team will give us hints of the update

And the final hint is this: 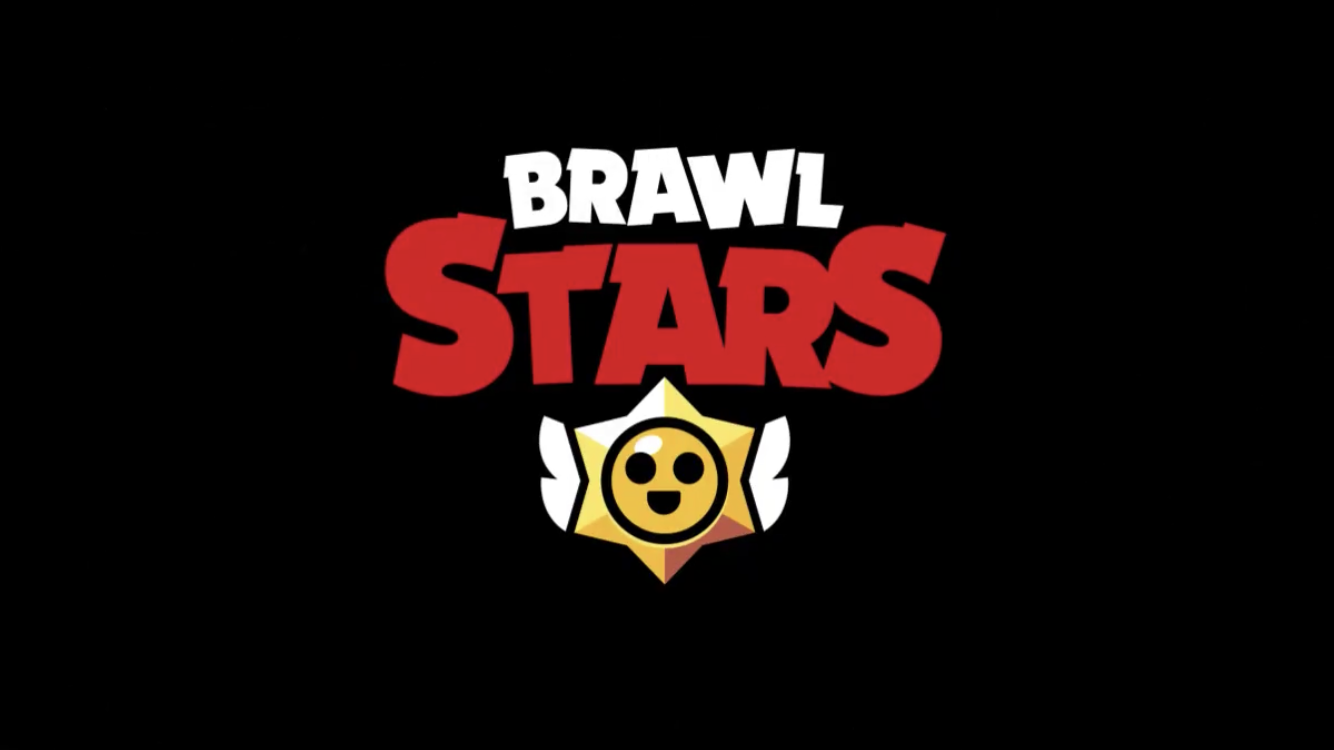 Brawl Stars could be changing it’s logo forever/only for this update!

Anyways, I’d be surprised if your still reading this @Mr. Maths and @Jellyattack length-worthy post, but not at the same time since it’s about Brawl Stars.

But hey, this is all just a theory...

Frank: now can attack while move

Piper: At ANY range piper attack will be the same as maximum range

Sandy: his sandstorm will shield you by 50 percent

Spike: his cactus needle now also have a poison for 4 second, and 1 second is 1/4 damage of total 1 needle, like crow, AND IT'S STACK

Tara: the card now also can fly through wall

Mortis: his dash can go through wall

Leon: when leon health is under 50 percent, he will be invisible

Bull: now you can control your super direction.

Tara adds a fourth card to her attack, this also double her trophies when she wins, but beware it will also double the trophy loss if she looses.

First, please join my comp! I linked this to my comment with the rule updates, and basically the competition simply requires you to create something unique in Brawl Stars.

636th post comp! | FandomSo I don't remember why I got 636, I commented it…brawlstars.fandom.com

But without further ado, let's get into today's idea!

"I think she's in the City now," Solum commented.

"You saw the news. There was someone with immense power in the city. I wouldn't doubt that he's going to be in league with that woman," Solum explained.

"So you thought of this and decided not to share with us?" Rosa raged.

"C'mon, let's get back to the City, quick!" Leon yelled, already running off. Rosa sighed, her posture drooping.

Agni, Fate and Tara looked at each other, amused. Then Fate heard something on the TV, currently still displaying the news. It was one of those big televisions attached to buildings; this to a pyramid, for no obvious reason other than showcasing any games. But it was currently displaying, "Breaking News!"

Fate nodded towards it as Solum and Rosa raced after Leon, with Agni in the shadows. Tara looked at it, and listened.

"New reports of casualties have been confirmed. A woman dubbed 'The Pain Killer" had allegedly caused the death of over hundreds today, bringing her kill count to 320. We warn yet again that if you see this woman, run immediately. Painkillers will not help against the Pain Killer," the news reporter was saying with a tinge of humor. The location at the bottom of the screen read, City.

Fate looked over to Tara and gave her a wry smile. Then, they started back to the City as the news continued, announcing the sighting of her with someone else, presumed a sidekick.

Afir broadcasts a ear-splitting noise, dealing 700 damage to all enemies in a quarter-circle range. Enemies hit through walls take 140 less damage for each wall the noise has to pass through.

Afir places down an antennae with 2160 Health. Whenever she uses Broadcast, the Antennae repeats the Attack in its position. Multiple antennae can be placed at the same time.

Afir lets out a banshee cry, stunning all nearby enemies for 1.0 seconds.

Afir's Attack ignores 20% of shields, and will also charge its Super if hitting Immune targets. ie. A 70% shield only shields 56% now, enemies in the air like Piper in Super that are caught in the Attack now charges his Super too, as if she had hit them though dealing no damage.

Please join my comp, I will be increasing the prizes as more people join.

Afir will not make any meaningful appearances on my other stories, or at least I have no plans for her yet.

The links to the brawlers I made that are in this story:

Ponos, known as the Pain Killer

Tara looked over to Fate. Their eyes locked. Fate could almost hear her screaming his old name. The name that is no longer his. Fate feigned ignorance and continued walking away. Tara met his eye again after placing herself in his path and he merely said "Excuse me".

Then Tara threw her black hole. A crowd gathered. Fate continued pretending not to notice but he was scared now. Tara was always calm and controlled. Reluctantly, he tossed up his index finger. Wait a second. He slipped into an alley and consulted his Oracle Eye. Tara looked at him, emotionless, but suddenly he realized. Tara couldn't use her Oracle Eye!

Fate's memories darted back without his permission. Tara trained him. He was born with the Oracle Eye. Tara's first lesson: Don't abuse the Oracle Eye. Fate wondered what happened that Tara lost the use of her Oracle Eye... of course! That was why she called him!

Fate took out a deck of cards and a pen. He sometimes did magic tricks, just small ones. Tara grabbed them and started writing. Woman tortured me, back now. Stole my lessons.

After a while, Fate got the idea that a woman had done some pretty bad things to Tara and isn't intending to stop. The problem is that, Tara can't exactly do anything to her without breaking the law. And the woman was evidently a law breaker.

"Well... we would need a hero. Nobody questions heroes, they're always good. Not one of those stuck-up ones like Max. Tick is too occupied."

"So I guess you'd need me," said a voice in the shadows. Fate threw him a card, not very expertly. He failed in forcing his hand, so the voice passed. He came into the light. Fate had seen him before in the shadows of the casino, but he was...

"You stole my money, didn't you?" Fate asked casually.

"Of course," the kid replied casually too. "I'm Agni, the cousin of Leon and the child of Noxur. I have some tricks up my sleeve too, you know?"

"A duel," Fate called, "but with Tara, she's the Skirmisher."

The kid threw a blade of darkness from nowhere before darting into the shadows. Luckily, there wasn't much shadows here. Tara threw her first set of cards, hitting one of them and revealing Agni. Agni shot two more blades as Tara threw her next two sets. Agni wasn't very tanky; he was running out of health. He would die to the next hit whilst Tara could survive once more. Then he disappeared back into the shadows. Tara threw her next set of cards, but only one hit. Agni barely survived. Fate realized he didn't set any boundaries, and Agni disappeared.

"Well, there goes our hero."

Then suddenly he materialized in front of Tara. It would take two more attacks... but he struck once and Tara was knocked out. He smirked. "I thought you would have heard of me by now and known my abilities. But I guess not."

Agni shoots a blade made of shadow, dealing 1160 damage. If this hits an enemy, for the next 1.5 seconds, Agni is invisible while within 1.66 tiles of a bush. (as if within bush, so when damaged or too close is exposed and is revealed for a second after attacking)

Agni delves into shadows... after a second, he appears in the shadow of something that he chose, and his attack damage is increased by 30% for the next second.

Hits to Charge: 5 (btw, in the short story above, did you really expect him to play fair and come into the fight without Super partially charged?)

Activate whilst in the middle of Super, or a half second afterwards: Agni deals 450 damage in a sweeping arc of the nearest target. If used whilst in Super, he materializes instantly.

Star Power 1: Dark of the Night:

After coming out from the Super, Agni is invisible for the next 1.5 seconds while within 1.66 tiles of a bush (as if within bush, so when damaged or too close is exposed and exposed for a second after attacking).

The idea of counting from four was from the Nyxia triad, and I used my own numbers. Ironically, it is a base 12 system despite the Time and Calendar being base 10. I'll use this info later (if I remember) for more world-building.

Now you know what Tara's weird eye is. Psychic Enhancer utilizes it.

This is so frustating... my tara almost gone to rank 24... so i tried to push and loses 28 games, thanks to randoms. i remember my ally crow jumps to the enemy base with `17 gems, causing me to lose. in a game of bounty, my piper random dies 7 times, after that she rages and keeps on spamming angry emotes. its so harc to push, not to mention plsying over than 30 min is illegal for my parents. I have to plsy illegally so i cannot find teammates...