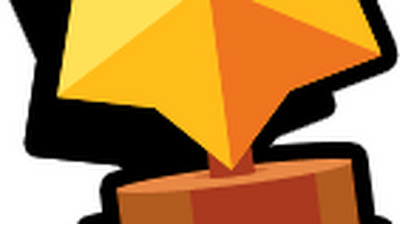 In the Lone Star Event, there are 10 players who start with 2 stars each. The objective is to kill enemy players and have the highest amount of stars at the end of the 2 minutes. When a Brawler is killed, their bounty gets added to the Brawler that killed them (which is indicated above their...

I was thinking for Lone Star to be added back, but this time rotating between Showdown and Lone Star

Cos i really enjoyed lone star as a piper

Cos i could go haha tick go boom

ModifiersLone StarTakedownPresent PlunderHot Zone
Yes! They were so good and idk why they removed it
Lol no they were so bad
wHerE's pReSeNt pLuNdEr??

Now I'm redoing all of them all new so I have multiple ideas. I'm putting 2 for Max, Bea, Mr. P and Emz as I didn't have them in my last posts. I also have some other update concepts.

I wasn't done with everything so another post will probably come soon but I feel the need to rush these out as the star powers have been done for a few days and people are posting more star powers too similar to mine so I'm just going to put these out there. Also, I honestly don't care that much but if you could leave a heart and a comment for my hard work that would be appreciated I want to figure out how many people see my posts

Shelly - Bandana Bullseye - If Shelly hits an enemy with all 5 bullets of her main attack, her next attack or super will do 30 extra damage per bullet.

Colt - Headshot - If 4/6 bullets or more in one ammo hit an enemy, his next attack does 20% more damage (Cannot work with his super, each bullet will charge ¼ of his new bullet bar which appears under his ammo.)!

Dynamike - Canary in the Coal Mine - If an enemy brawler is within 3 tiles of Dynamike (Whether he is walking towards the brawler or they are walking towards him), his Canary will alert him by flashing the brawler's location in red (If they are in a bush, they will be revealed only to Dynamike)

Tick - Bugging Me - If Tick is able to hit ⅔ of his mines in one attack for 2 consecutive attacks, he will gain 500 bonus health (Does not stack and cannot be regenerated).

8-BIT - Player 2: Get Ready - 8-BIT adds an extra player slot, allowing him to use 2 blasters. This allows him to fire twice as many shots at the cost of a 40% damage reduction. He now fires 6 bursts of 2 shots at once in a wider radius in front of him (Radius increase to 1.5 tiles)

Emz - Flash: On! - Enemies within 2 tiles of Emz will be stunned for 1.0 second when using her main attack

Emz - Check my Followers! - Friendly brawlers within 4 tiles of Emz including herself will gain a 10% speed boost. The effect cannot pass through walls.

Barley - On The House - Barley now adds 1 extra tick of damage to his super. His super’s attack diameter per bottle is also extended by 0.5 tile, allowing it to cover slightly more range.

El Primo - Out of the Ring - El Primo’s super can now be controlled to move in a different direction towards an enemy in the air. (If he veers straight after his super jumps, he can veer up to 2 tiles left of right. If he autoaimed, the veering will also autoaim.)

Rosa - Among The Trees - Upon exiting a bush, Rosa gains a 10% speed boost for 2 seconds. The effect is only active outside a bush and will not be active if Rosa is just in a bush.

Poco - Encore! - If Poco hits all 3 of his attacks, he automatically charges his super. If his super is already charged, he will regain all 3 ammo.

Carl - Cavern Crumble - Carl's super can now break walls! Hitting a wall 3 times during his super will break it! If a wall isn't fully broken during his super, it retains cracks that change for each level of breaking. (Few Cracks, 1 large crack, 2 large cracks, about to break apart)

Penny - New Lobber - Penny finally decides to upgrade her old lobber with new features! She is now able to place her cannon on water or on other blocks. If the cannon is on a special block, it gains one of the following boosts: (Boosts don’t stack, credit to Omicron as this idea is somewhat similar to his concept for Pillager. Also, I'm not sure about the name so if you have suggestions please comment see the possible names at the bottom. Finally, I'm not sure that it should change appearances but I put it just in case.)

Bea - Metallic Stingers - Bea’s main attack will now charge when it hits Large Robos from Siege or the Showdown Modifier, the IKE Turret, and the Heist Safe.

Bea - Protect the Hive - Bea’s super now releases 3 additional Bees, and each bea does an extra 50 damage. Each bee now injects enemies with wasp venom, making enemies take an additional 50 DPS for 3 seconds. (Poison damage can stack for up to 500 DPS.)

Bibi - Fastball - Bibi’s batting range is increased by 3 tiles when her home run bar is active. If she hits outside of her original range, the knockback is negated and her bar is spent. OR Curveball - Bibi’s bat now hits around her in a circle for damage front and behind! (Vote in the comments)

Pam - Junkyard Jamboree - While in the radius of her super or when her super is fully charged, Pam gains 8 extra bullets in her attack, making it easier to hit enemies.

Frank - DJ Frank’s Jam - Frank listens to some cool tunes, allowing him to hit his hammer harder. The shockwaves now travel further and can travel 1 additional tile for the width and height of his attack.

Mr. P - Take The Stairs - Mr. P forces enemies to take the stairs up the hotel. When his attack hits, each hit slows enemy reload time by 0.5 seconds. If his attack hits an enemy twice from one attack, the enemy is also slowed for 2.0 seconds.

Max - Possible Side Effects Side-Effects - When Max uses her super, the discarded energy drink lingers, as the side effects kick in! It spawns a 4 tile radius that slows all brawlers, friendly and enemy, that cannot be destroyed, After 5 seconds, the cup disappears.

Max - Slower Than The Slowest! - Max’s super now has an additional range of 2 tiles to her super. All enemies caught in this effect will be slowed for the duration of Max’s super by 20%. (Friendly Brawlers in the extra radius will not gain a speed boost.)

Mortis - Bloodsuckers - Mortis’ super now homes in on enemies. The bats can hit up to 3 enemies before disappearing, and can only travel a total of Mortis’ super’s effective range.

Tara - The Beyond - Tara’s ancestors from the Beyond take a golden version of Tara. While Tara and her allies are within 4 tiles of the Golden Tara, they gain at 10% speed boost and a 5% damage boost. Golden Tara moves to follow Tara. If Tara dies, it follows the ally with the most health. Golden Tara has 2000 health

Gene - Wish for More Wishes - After using his super (whether it grabs someone or not but will not effect if he shoots the ball in brawl ball), Gene gains 1 additional ammo allowing him to burst down brawlers. This extra ammo cannot be regenerated and will be used first out of all 4 ammo. If 5 seconds pass without attack, Gene loses the extra ammo.

Leon - Dropping By - When Leon hits all 4 consecutive blades from his first attack after dropping out of his super, his next attack will do 50% more damage at close range.

Crow - Caw! - When Crow uses his super, he throws out 2 sets of 3 daggers in midair towards the nearest enemies. These daggers can travel 5 tiles and do 100 extra damage if they hit, but poison damage stays the same.

Spike - Cacti Armor - Spike gains 1500 additional bonus health that cannot be regenerated naturally but will regenerate every respawn. Enemies who come within 2 tiles of spike will now take 200 damage per second, and his armor will lose 100 health per second. If his armor is broken, he can regain it by standing in his super for 10 seconds (2 full supers)

Goalies is a new concept, they are only allowed to move in a small 4x5 box and can only attack from there. They have a 2 tile grab-box. This mean that they can grab the ball from 0.5 tiles on either side of the brawler. If goalies have the ball, they can kick it with their regular attack or super. Goalies can’t die, but can be stunned if they lose all their health for 3.0 seconds

Map size: slightly smaller than a showdown square, goals on either side in the middle of the side

How the match goes: At the beginning of the match, the team of 6 is able to vote on who should be the goalie. Is should be someone with longer range due to the low area of movement. In case of a tie, a random person is chosen. 2 teams of 3 are able to be together, but you can’t form a team of 6 beforehand. After that, it’s just like regular brawl ball with the few changes that have been suggested

Lonestar and Takedown are back in the temporary event slot new and improved. This is to see if they will be added back in.

(Note: I didn't really figure out how to improve Lonestar so it may be removed again in the future. Also, the name for Flag Grab could be Smash and Grab, which is the original name for gem grab. Otherwise, if it's too similar to gem grab, we could do capture the flag but I was going for something more original)

Description: Polly is a Palynologist who studies pollen, and is Bea’s best friend. For her attack, she throws out her vine whip. Her super releases a flurry of flowers that explode and knockback enemies.

Attack: 1260 damage, 1 projectile, can hit multiple enemies in a line, retracts. Unloads the attack in 1.3 seconds and then retracts in 0.5 seconds

Star Power 1: Drowsy Pollen - If Polly’s attack only hits 1 enemy, it will slow enemies for 2.0 seconds.

Star Power 3 (Concept 2): Congested Sniffles - Enemies over 2000 health will now become so congested, it becomes hard to breathe and they start taking 100 damage per second for 3.0 seconds when hit with Polly’s attack

I'm taking suggestions so feel free to do some posts on how to improve!

(Also, if you don't believe me that I was done with all my star powers before everyone started posting, here's your proof in my google doc: 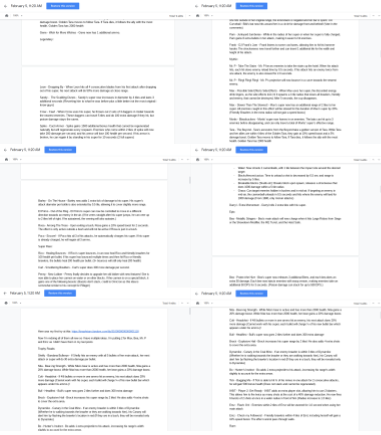 There is 6 images put together showing how all star powers were done in my google doc a few days ago. (They were actually done on the 4th)

Vote for your favorite name for Penny's new star power:

Please vote for the appearance changes for Penny's new star power as well:

All (Model, model attachment, and projectile)

Edit V1: Penny's star power has now added a small change to the cannon skin only in her default skin (Or maybe all skins you vote) to indicate the change.

(edited by GAK16)
RosaBrawl BallLone StarTakedownPresent PlunderBeaHot Zone
Absolutely amazing. Hated both modes.
I liked Lonestar
I liked Takedown
LOVED THEM BOTH
Only used em to push brawlers who were gud in them
I don't know what those are 😭