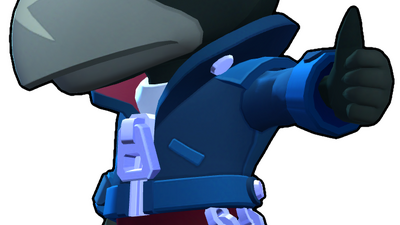 Crow is a Legendary Brawler who can poison his enemies over time with his daggers but has rather low health. He attacks by firing 3 long range daggers that inflict poison on his enemies, dealing damage over time. Crow's Super allows him to jump and land while throwing daggers radially around him... 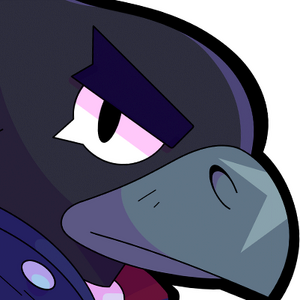 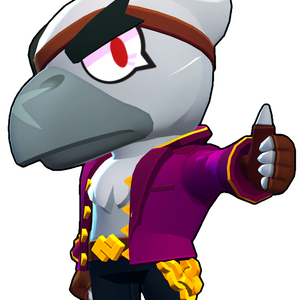 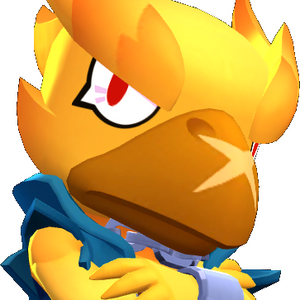 Colt was strolling down the street in his tiny town, Spike waved at him, all of a sudden the air split and a robot wearing boxing gloves popped out, Colt waved and said “Hi...” the robot looked at him for a second and said “Enemy Spotted!” It gave Colt a punch in the face “Ow!” Colt said, he started firing his revolvers and it’s was destroyed easily.

Few hours later he headed to his dads restaurant in Retropolis, Bull was not only in a gang, but he’s secretly a amazing chef, Inside he saw Brock and Bibi and Bull preparing a steak, Bibi greeted Colt, “Hey there cowboy,” while popping her ‘BBGum’ “Call me Colt please,” Colt said, “Aw don’t be shy, who doesn’t like nicknames? Plus you are kinda a cowboy,” Bibi replied, while heading out to a baseball field.

Colt was not so happy about that, then Crow randomly got thrown into the restaurant breaking the window, “Hey watch it!” Crow said, as he pulled his daggers and destroyed a similar robot that Colt saw, Colt was puzzled, then he saw Bibi batting her ‘BBGum’ at a robot with a gun, it got smacked in the face with it and got stuck to a wall. “What’s going on?” Colt said, Bull came out “You should go ask your mom, she should know more about this,” he said, “Ok, I’m outta here,” replied Colt.

Few minutes later he was there, and Jessie, Pam and Nani were nowhere to be seen, Nani peeked and said “Be careful!” Colt was confused, then a robot grabbed him from behind and threw him into a wall “Ow!” He said, then Jessie came out and shot the robot, “What’s going on?” He was really confused, “I think the system got hijacked,” Pam replied in a concerned way, “Yeah, so how do we fix it?” Colt said, “Don't worry we got this,” Jessie replied, “If you do, I’m gonna go get some coffee,” Colt said and smirked, “Ok, bye,” Nani said. 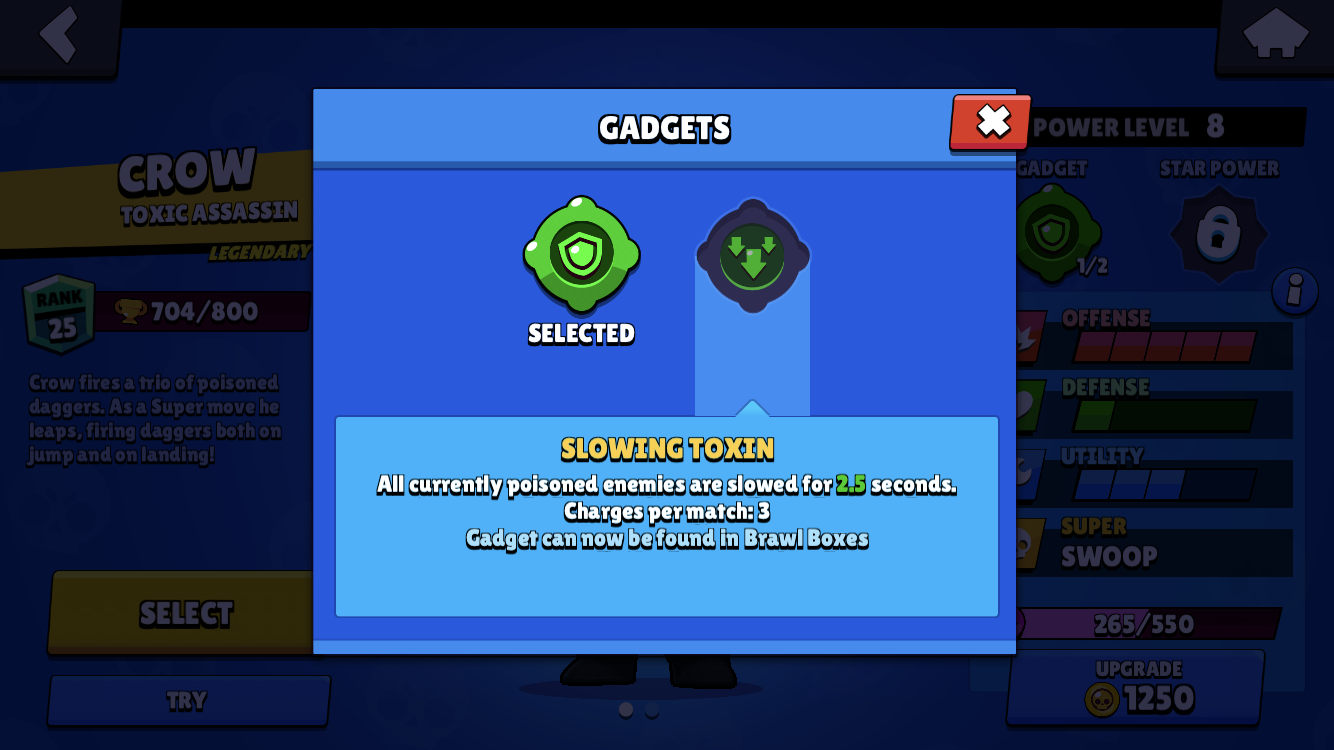 Doesn't 8-bit and pam use the same mechanic? fast shooting and some sort of booster for you team

Crow
I loved it
He's just cool
I prefer the older one (LIAR!)

So we start from number 3 and go to the number 1:

He did a really good job on this but he worded it like a brawl talk, he got 26 marks, WELL DONE!

He also done a really good job on this but cmon even tho you subbed you still got second place, he got 36.5 marks

WHAT A STUNNA! He did the best out of all and all, he got 40 marks, NOW YOU CAN CONTROL MY ACCOUNT FOR A VIDEO! YOU TELL ME! I DO!

Crow's gadget slows down poisoned enemies. This is going to help a lot in 3v3. In Brawl Ball/Gem Grab, you can slow the ball/gem carrier. I personally think that Crows new gadget is going to be better than defense booster

So Crow has this new, hardcore look right?

But he still has the same squeaky voice T-T

Spike: Thorn Shield (3): Spike gains an extra 1000 HP. When he loses all of his extra health, He reloads all ammo.

Crow: Backstab (3): Crow charges his next attack, making it throw an extra dagger.

Sandy: Super Sleep (3): Sandy falls asleep for 2 seconds. After sleeping, he charges 50% of his super.

Welp, I was expecting it but I'm still saddened none the less. Guess our favorite yellow bird will be keeping his 2018 model for possibly forever, since Frank confirmed no more remodels will be made to any brawlers except Jessie and Penny.

Crow
Yes, and change some stuff about him
Yes, but only a very minor polish
No, but maybe in the future like Dumpling Darryl
Nope

4.Chameleon- you cannot change the fact that he is the worst brawler in 3v3. Even in his best gamemode, showdown, he cannot stand up against teammers and other heavyweights.

3. Angry Bird- like, Leon, he struggle against teammers, In 3v3, his damage is too low to deal with sharpshooters/heavyweights

2. The Brawl Stars Cactus- He is good at melting the safe in Heist. In Brawl Ball and Siege, He is good against Tanks. In Gem Grab, His super offers a lot of value. He is also quite good in showdown

1. Sleepy Boi- One of the best brawlers in 3v3. His super offers a lot of control. His gadget helps him to heal up quickly so he can continue to battle.