8-BIT is a Common Brawler who is unlocked as a Trophy Road reward upon reaching 6000 Trophies. He has both high health and damage output, but suffers from a significantly slower movement speed compared to other Brawlers, making him unable to chase them down. He wields a laser gun that he uses to...

Mr.P's spike socks in his suitcase that get dropped when Mr.P's suitcase bounces, will stay on the floor for 3 seconds. It helps "keep your feet warm", a friendly teammate of Mr.P or Mr.P himself gets healed for 250 per second (total of 750 health if stayed on sock for 3 secs). There are 3 socks. But enemies stepping on these socks get 'burned', depending on how long they stay there (first sec 50 damage, 2nd 100 damage, 3rd 200 damage). The spike socks drop every 3rd successful attack that Mr.P does (who wants socks all over the map lol). There are going to be 4 spike socks that drop when it does happen.

When Gene pulls someone towards him with his super, that brawler gets 1000 damage once the magic hand grabs on to them, so Gene can finish the brawler off easier!

Instead of just using her super to help allies speed up, allies around Max would have their normal speed plus 10% of that speed! (sort of like Magic Puffs for Gene but with speed)

Every 6th time Sandy does his attack, he stuns for 2 secs. Stunning the opponent doesn't do any damage, though, it just stuns them, and they are unable to move for those 2 secs.

When Nita's bear gets defeated, the bear lets out a deafening roar, which stuns opponents around the bear, and is guaranteed to hit the opponent who killed the bear (let's say a Rico killed the bear at far range; no matter what he will get hit). The enemy will take poison damage from the noise and get stunned for 3 secs (poison lasts for 5 secs, 100 damage per sec).

In addition to spinning his pickaxe while activating his super, Carl also 'rolls his cart', adding an additional 100 damage every time to his pickaxe damage when spinning. Also, Carl rolls one last time when his super ends, dealing 500 damage (only on his super).

Darryl's super has an added range of 5 tiles, and when he activates his super, he no longer stops at a wall or stops at a person! He does his reg barrel damage and just keeps moving, destroying environment until his range ends.

8-bit's super has an added area of effect, and also speeds up 8-bit (to the speed of Max when she activates her super) only when he is in the area of effect. If he gets out, 8-bit's speed returns to normal.

When Bo, places his mines and someone activates them, even if they don't take damage, a little spiritual eagle would appear and follow that brawler to attack him/her 3 times; each time with 1000 damage. The eagle is unbelievably fast, but has only 1000 health. Every mine has 1 eagle, and if someone activates the mine and takes damage but doesn't die, the eagle appears to attack. The eagle is 'attached' to someone, if that someone dies on, let's say, the first pounce of damage, the eagle dies even if the eagle has 2 pounces of damage left. If someone dies already from the mine, the eagle would find another opponent to hassle.

Colt's bullets have a certain 'wounding' effect. When colt hits someone with his reg attack, that brawler gets 20 damage for 2 seconds, 2 times (total of 40), plus the regular damage. But, that's just 1 bullet. The number can be multiplied to the amount of bullets hit (for a total of 120 damage if all 6 bullets are hit). His Super, however, has every bullet have 50 damage for 5 seconds (total 1500 damage if all are hit) plus the initial damage.

If someone gets within 2 tile radius of spike, that brawler suffers 50 damage for every second that brawler is there.

If the TURRET of Jessie, not Jessie herself, kills someone, than the turret gains their attack for 3 turns and doubles the attack power, and heals itself for 100.

Every 12th rocket that Brock fires is an "Intergalactic Rocket", a rocket that is triple Brock's actual rocket damage, and is bigger for easier targeting. It does not matter whether you hit the 1st, 2nd, 3rd,----, 11th rocket successfully, it will happen every 12th time whether past attempts were successful or not. If you miss, then it will be every 24th time, so make sure to use it wisely!

Every time Shelly almost dies and is on 100 or less health, her attacks get triple her normal attack, and she is faster.

When El Primo's Super doesn't hit someone, El Primo gains super spicy punches, which makes the damage for each punch double and triples the amount of punches for 1 attack.

When Crow uses his Super, Crow's arrows make people get poisoned for triple the normal poison, and Crow is immune to 30% of the damage output. Both of these effects last for 3 seconds.

That's it for now... I'm thinking of new ideas. Please comment and tell me what you think! They would really help, and it helps me make improvements!

When Shelly used her super, she will have a 50%Damage reduction for 4 seconds

When Colt has 30% or less hp, he will have a ring in which all brawlers will be knockbacked and slowed for 2 seconds

The turret will increase its MaxHp by 100 every 2 seconds for a maximum of 600.

Every Super rocket Brock hits, he gets 0.4 ammo instantly

If all three ammo did less than 4000 damage, bull will get 1 ammo back instantly.

If all three mines did not detonate in 20 seconds, The remaining ones will charge up 1/3 of the super bar.(1mine =1/3 of super bar charged)

If ticks head detonates on A brawler, his max hp will be increased by 1500 for 15 seconds.Otherwise(No explosion or hit a turret), he will heal 1500 hp.

Every kill EMZ gets, she charges her super by 1/4

Okay. Let's see if you're good at using your brawler.

For example if I have

1=You just picked this brawler, or you're so-so.

0-1= Without star power: This is not the brawler for your style. Don't use it (You can if you want)

With star power: You wasted a lot of coins in the brawler.

P.S. Can you leave a heart on this? Like

@TeleTrickster 's page: let's make this the most upvoted page!!!

Everyone talks about how gr8 EMZ is.

I really think that 8-bit and EMZ should swap side in trophy road.

Like if u agree and have a nice day!

Bull-in da bush( and your dead)

Dynamike- Old man that probably lived in the mines too Long

Tick- a pest(figuratively and literally)

Barley-has alcohol that damages you

Penny-richer than EMZ and piper

Here comes the first legendary my stepbrother and I invented. I swear we invented her before 8-BIT came out.

Pixie shoots two thin laserbeams parallel beside each other and uses her super to automaticaly damage enemies and heal all friendly brawlers.

Pixie shoots 2 identical and parallel running laserbeams from her cool VR-glasses. If she turns, the beams rotate with.

(The beams have a medium speed. They first strech completely before desolving again the same way.)

Pixie takes 3s to programm a virus that instantly damages all enemies. Then, with no delay, all friendly brawlers are healed by the exact amount of the complete damage done before.

Pixie hacks into the starpower of a nearby brawler, as far as possible. If there´s no brawler nearby, her attack range is doubled.

Pixie programs arandom Starpower-algorithm according to the event she´s playing.

Possible Starpower - Modes it can be used in:

>Pixie deals 66 extra damage on both beams. - All modes

>If Pixie carries the most gems/has the ball, she has a shield that lets her take 30% less damage. - Gem Grab; Brawl Ball

>If Pixie or her teammate is killed and respawns, he/she automatically gets the amount of cubes the other one has. - Duo-Showdown

>While Pixie is on her own half of the field/in her own turretrange she walks 10% faster. - Brawl Ball; Siege

>While Pixie is on her own half of the field/in her own turretrange she has a shield that lets her take 30% less damage. - Brawl Ball; Siege

>If Pixie has the ball and uses her super to shoot it, she can kick it over obstacles, though the range is halved. - Brawl Ball

>If Pixie programs her super close to a safe she has a shield that gives her complete immunity to any kind of damage for that time. - Heist; Robo Rumble

Pixie looks like a mid-30 woman with black pants, black jacket, green t-shirt and VR-glasses on.

Trophy road Brawlers to Uncommon is: Tick and 8-bit;

Rare Brawlers to Uncommon is: Barley 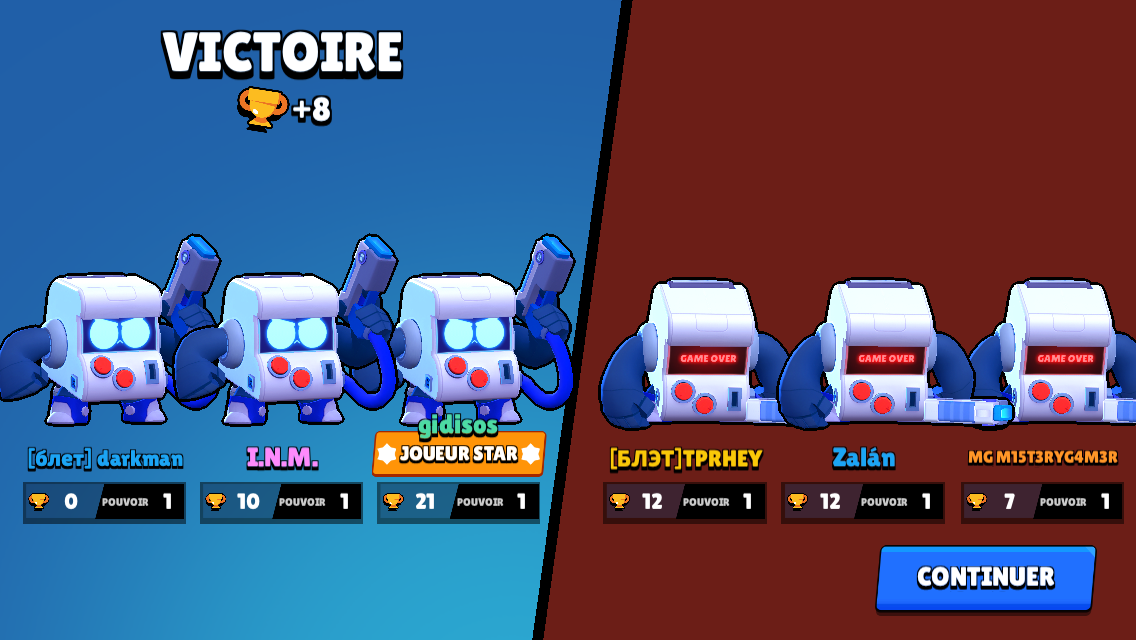